Thursday night, no sooner had I finished my menu plan for the rest of the week and next week, and made my grocery list and Vince said “I want to try Weight Watchers again.”  Part of me said NO!  I love Blue Bell ice cream but the truth is, we both need to lose weight so I mustered all the enthusiasm I could muster, while dreaming of an icy cold Dr. Pepper . . and said “great idea”. 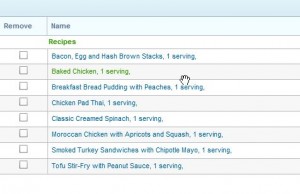 He signed up and I quickly went through some of the recipes and came up with enough of them to get us through a few days, made my new menu plan and new grocery list and we are officially on Weight Watchers.  I sound like a failure already but I will have one Dr. Pepper a day and Vince and I will split one container of Noosa yogurt as long as that’s something we really, really want.

We went to Wal-Mart and bought scales because we haven’t found ours since the move.  No excuses now . . just have to do it!

I will not share the Weight Watchers recipes here if they came from the WW site because you have to be a member to get those and I don’t want to run into any problems.  If I can find the recipes other places besides WW, I will link to them.

This morning, we had Bacon, Egg and Hash Brown Stacks and they were delicious!  For lunch we had sandwiches on whole wheat sandwich rounds. Vince gets more than twice as many points as I get.  He may have a hard time using his points!  Not fair!  For breakfast, he drank coffee and I drank orange juice, which was more points than coffee.  For lunch, he drank water but I drank buttermilk.  Again, more points used by me.  I need to learn to like drinking water with meals.  I don’t mind drinking water but just don’t drink it with my meals.

For dinner tonight, we’re having Tofu Stir Fry with Peanut Sauce. By then, I’ll have just enough points to have a Dr. Pepper with dinner and Vince and I can split a yogurt for our evening snack.

Hopefully we’ll both see good results and will not feel terribly deprived.