Yesterday we made the Honey Lime Chicken Soft Taco recipe from 365 Slow Cooker Recipes by Stephanie O’Dea. One of the things that readers have recommended and I’ve found resulted in better crockpot results is not cooking things quite so long.  The recipe called for slicing the chicken so since it was so thinly sliced, I only cooked it about 4-1/2 hours on low, then let it cool down and put it in the fridge overnight.  We had planned it for a late lunch on Sunday so I cooked it on Saturday night, then heated it up on Sunday.

We served them with chopped cilantro, sour cream, grated cheddar and sliced limes to squeeze additional juice on the meat.  We also had borracho beans with the tacos. 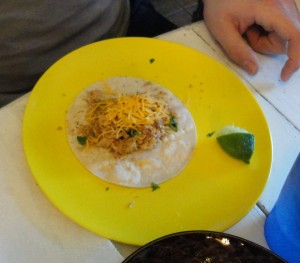 They were delicious and just how delicious were they?  Chad ate 5 of them!  This recipe gets 5 stars from us.  It will be so easy to make this meat and have it in the fridge to heat up for lunches or for quick dinners when there’s too much going on to get a full dinner on the table.