Yay!  Numbers to add to the “used” column!  1 skin of the Noro for the feathers and 1/2 skin from the second skein of background yarn Dreambird for a total of 1-1/2 skeins used.  It sure comes in easier and quicker than it goes out!

Added — the 12 skeins of Freia for the Agata sweater. 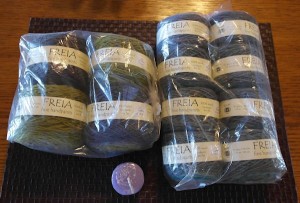