Those Silky Bantams are prolific!  Way too prolific.  The first time our “chief” hen, Louise, sat on a nest of eggs, we marked the date on the calendar, checked the progress almost daily, and were so excited for those first babies to hatch.  We closed the coop door and kept all the chickens inside til the babies were big enough to go outside.  It was during the winter so keeping them inside wasn’t a big deal.

The third batch of babies . . we bought the chicken nursery.  That was another (a fourth) coop to clean, and make sure there was food and water.

The fourth batch of babies . . it ended up being just one that hatched.  We didn’t even know an egg had hatched til I was gathering eggs and saw him.  That was July 8. We just left him in with the others.  He ran around outside the pen, Louise flipped out stayed in a panic but he survived and most always came back into the run in time to get closed up at night.  A few nights Vince and I had to chase him down and catch him.

Here it is just a tad over two months later and yesterday I was outside gathering eggs and found a little surprise. 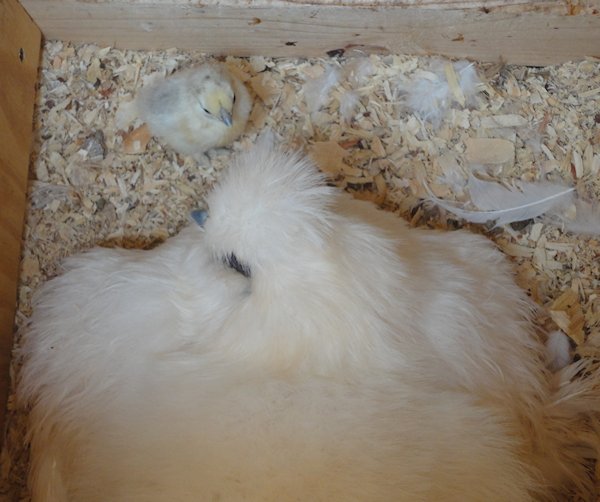 We’ve gone from 3 Silkies to 9 Silkies.  Louise has more eggs under her but really, I’m hoping just one hatched.  We just don’t need more Silkies!