As I was thinking about writing this blog post, something about fruit triggered a memory.  When I was in junior high (middle school nowadays), about the worst thing we could call someone was a “fruit”.  I don’t even remember what it meant and probably don’t want to know but I can remember thinking some folks were “fruits”.  And no . . I don’t remember who was and who wasn’t.

I love fruit . . not the kind of folks I mentioned from my school days . . but the kind that grows on trees.  So far, we’ve planted the following:

We still want to plant:

Yesterday I picked the last jujube.  We got three from our little tree this year.  That was pretty good for its first year considering that it arrived quite late and was bare root. The third one I left on the tree much longer than the others because I totally forgot about it.  The others I picked when they were just getting golden.  This one was almost brown.  It was way sweeter than the others I had picked so next year I will know to leave them on the tree longer.

The only other trees that are bearing fruit are the fig trees, one in particular. 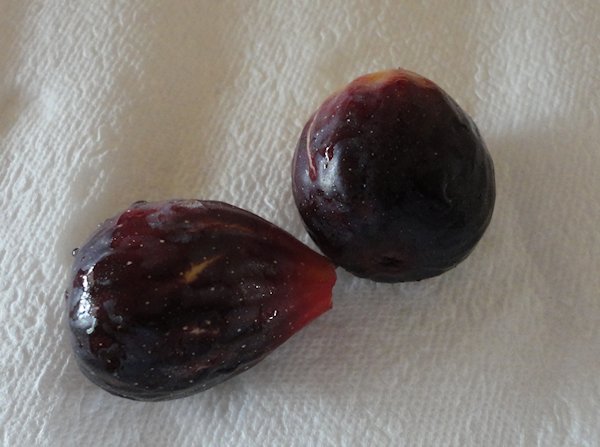 Every day I get anywhere from 2 to 6 figs from that one tree.  It’s weird though because it froze back.  None of the other fig trees showed any damage from the cold at all.  This one tree had appeared to be completely dead.  I cut it back like I did the others, a bit of new growth appeared and then it shriveled and died.  The other fig trees were fully leafed out and this one still appeared dead.  Vince said he would dig it up and we’d buy a new one to replant in its spot but one day I glanced over towards it, and it had a few leaves.  By then it was quite late for it to just be getting started but it has grown so much.  It’s way over my head and all the other trees are not even half as big as it is.  I got a few figs from two of the other trees, 3 didn’t give me a single fig.  The tree that almost died is big, and healthy and has provided us with probably 4 dozen fat, sweet, juice figs!

I do believe I could live off fruit.  Maybe add a Dr. Pepper every now and then.