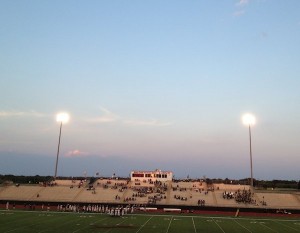 Have you seen the Friday Night Lights series?  That series could have been written about any small town in Texas.  High school football is about the most important thing that happens around these parts.  We had not been to a football game and went to our first one last night.  Vince and I had never been to a high school football game together and the last time I went to a high school game was in 1979 and my house burned while I was at the game so I was hoping this would be a totally different experience. I’m very happy to say that my house is fine!  🙂

The stadium is amazing . . not like any high school stadiums I remember, but I think that’s indicative of the importance of high school football in Texas.  They do share a stadium with Howard Payne University so that helps I’m sure. HPU happens to have just been named one of the best regional colleges in the west.

Last night was our homecoming game.  Last year’s homecoming queen is the daughter of my favorite UPS driver.  He was by the house last night just before we left and he said “Maybe I’ll see you at the game!” We didn’t see him but the home side was packed . . also pretty typical.

The game could not have been more exciting!  Brownwood won . . 46 – 43 but it was right down to the last few seconds.  The guy doing the recap on the radio said “What a wild, wild second half!” and he was right!  I think most of the spectators were standing up at least the whole 4th quarter.  It was our first win this year and I can only guess how happy the new head coach was with the in. I’m pretty happy about it too because his wife is my dentist and I want them to stay here til all my teeth fall out.  I like her a lot!

It was a great game and I’m thinking we might go to a few more this year.