Only one pattern was added this week and it was the Guernsey Wrap for the Fourth Quarter Challenge at The Loopy Ewe. 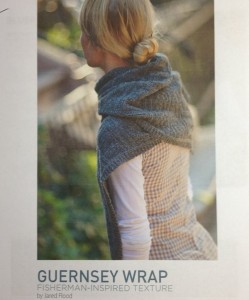 As always is the case, I have a very good reason for the yarn I added. All of the yarn below is for making Little Cotton Rabbits.  The greenish tan on the left is for a rabbit.  The reddish brown is for a fox. The tan in the middle is for a rabbit.  The black is for trim.  Those are all Cascade 220.  The ecru skein on the right is The Loopy Solids and it’s for dresses and tights.  The smaller cakes of yarn in the packages at the bottom are Loopy Cakes.  Those are smaller skeins of the regular Loopy Solids and it takes 3 of them to make one regular skein so I’m counting all of this loot as 9 skeins added. 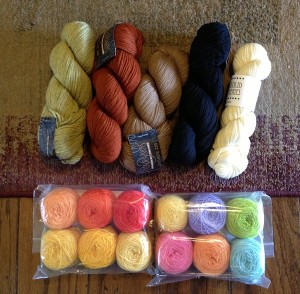 In the used category, I finished one skein that I’m using for the background on the Dreambird project.  This means I’ve added 23.75 more skeins of yarn than I’ve used since the middle of August. Not the best example of stashbusting but I’m headed in the right direction because I’m buying less than I used to buy. That’s my story!