Probably a year or so ago, we began using almond milk instead of cow milk.  I haven’t drank storebought cow milk in many years but I will drink raw milk when we can get that and I will drink buttermilk.  Weird, huh?  I tried to like storebought almond milk . . not for any particular reason. It smells good but to me, it tastes kinda sticky or slimy. Vince loves it.  He uses it on his cereal and when I eat cereal, I can use it on there but I cannot drink it.

A few months ago, I tried making almond milk.  At the time I was using my regular blender, which was just an inexpensive blender (real inexpensive because when I bought it, Chad was living at home and he used it more than I did).  It wasn’t terrible when it was new but it had seen better days.  When making almond milk with it, I never felt like I was getting enough “almond” out of the nuts and gave up.

Of course, I start with almonds.  The amounts used is dependent on how much you want to make.  The almond milk keeps for a couple of days in the fridge, but not much longer than that.  It’s so easy to make, I mostly make it every morning.  Start with raw almonds.  The ones I buy are pasteurized because they’re easier to find that totally raw as in just out of the shell nothing done to them almonds.  Some things I read say that ALL almonds sold in the U. S. have to be pasteurized and then I’ll find a place online that is in the U. S. that says it’s selling totally raw and unpasteurized almonds.  It really doesn’t matter to me . . I take what I can find easily.  Almonds do grow around here, though I’ve not seen any for sale, nor have I seen any trees.  If my choices are buying pasteurized almonds, or shelling raw almonds myself, I’ll probably buy pasteurized almonds!

I put 1 cup of almonds in a jar and fill it with cold water.  I leave it sitting on the counter during the day but put it in the fridge over night. 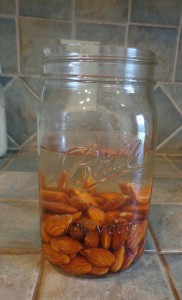 Here’s the difference in 1 cup (left) of almonds that have been soaked overnight and 1 cup (right) that have not been soaked.

Drain and rinse the almonds.  Place them in the blender with water.  Since I used 1 cup of almonds, I add 2-1/2 cups water. Some folks add more, some add less.  There’s no exact right or wrong . . just do what works for you.

Almonds in Blender with Water

If using a Vitamix, start with it on 1 and gradually turn up to about 8.  Blend for a few seconds.  Let rest, then blend again. I do this several times.

The blended almonds and water will have to be strained through something.  You can use multiple layers of cheesecloth, though I find it allows some of the meal to get through.  I used to use a lint free dish towel and that worked but my favorite way is to use a nut milk bag. I like this bag because I can just rinse it out and hang it over a cabinet door knob and it’s dry in an hour or so and it doesn’t need to be washed in the washing machine where it might pick up dog or kitty hair. I place the drain bag over a half gallon jar.  I’m only going to get about 2-1/2 cups of milk since I used 2-1/2 cups of water but with the half gallon jar, the bottom of the bag doesn’t sink back down into the already drained milk.

Allow the milk to drain.  I will sometimes hang the bag from the cabinet door knob so I can see when it’s done.

Once it’s drained, it can be sweetened with either sugar, honey, stevia . . whatever you want to use, or it can be used unsweetened.  If I’m going to be drinking it, I add a little sugar.  If I’m using it for smoothies or cereal, I add no sweetener.

What’s left from the almonds is this:

In another post, I’ll tell you what I do with this yummy stuff!  In the meantime, figure out how much almond meal or almond flour costs in the store and you’ll know the value of this by-product of making your own almond milk.