I have a friend who has a friend named Coco.  I doubt his real name is Coco . . in fact, if he weren’t 100% cajun, I’d be 100% sure that isn’t his real name but . . well, dang it, I’m probably being politically incorrect again.  I love the cajun folks and wish I had that accent and wish I cooked like they do but I don’t but anyway . . my friend’s dad calls her friend “Coconut” and I can’t stop calling this project “Coconut Pearls”.  Isn’t it amazing how things get in our heads and corrupt things . . even simple things like the name of a cowl?

OK . . my project is finished.  The reason it’s finished is because the next step on my Icy Rivulet requires uninterrupted thinking and that wasn’t happening around here on a weekend when my dear husband is home.  When Chad was around, after much working together to make it happen, he learned that if I was quilting on the longarm, to wait til I stopped before saying anything to me.  First, I was most of the time in the basement with my headphones on and when he screamed “MOM” . . it scared the  you know what out of me.  Second, it made me mess up my stitching.  I always stop at the end of a row so it wasn’t like he would have to stand there for a long time waiting but he did eventually remember to wait til I stopped before getting my attention.

On the other hand . . Vince . . I’ve tried to tell him that if I don’t answer him immediately, it’s because I’m either counting or need to get to a spot where I can remember where I left off before I stop knitting . . especially when doing any kind of lace work.  He’ll ask a question, I won’t answer.  He’ll repeat it, I’ll say “just a second” and in a grumpy tone, he’ll say “Why are you not answering me when I talk to you?”  Hmmmm . . have we talked about this before?

So, anything that requires concentration has to wait til he’s at work.  Guess I’ll go back to knitting plain jane socks when he retires!  🙂  Friday evening I got to the point of binding off the Icy Rivulet and it’s a technique I’ve never used.  I read the instructions and it sounded confusing, though I know once I start, it will be ok . . I just had to put it off til I was home alone.

In the meantime, I went back to Coco’s Pearls and got it finished last night!  Here it is being blocked. The color is way off in this picture. 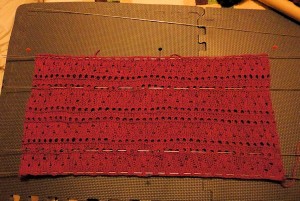 Now, it’s blocked, ends are woven in and trimmed.  Totally finished!  The color is correct in this picture . . taken in daylight. 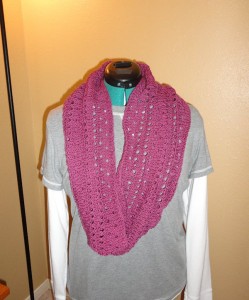 About the pattern:  Loved it!  Very simple.  Easy to do without having to pay too much attention . . interruptions aren’t an issue.  With the large needles, it goes quickly.  It requires about 350 yards of DK weight yarn so it isn’t terribly expensive to make.  I think I’ll make it again . . it would make a great gift for a friend.

One note . . I don’t think this cowl is long enough to double wrap so if you enjoy wearing cowls closer to your neck, I would recommend making it a bit longer.  Here, it never gets very cold so I prefer not to have something close around my neck so I like this length.

About the yarn:  Really loved knitting with the yarn.  I read the reviews and some felt it was splitty.  I can see how it could be but it is 50% cotton and probably to be expected.  Splitting wasn’t an issue with this pattern.  I also read that the yarn doesn’t hold up well to a lot of wear but hopefully a cowl won’t get as much wear and tear as a sweater or other projects.  There was a bit of bleeding when I soaked it.  I’d be a bit hesitant to use a dark color with a very light color in the same project.  I also read on Ravelry that this yarn is being discontinued. That makes me kinda sad.  With this project requiring  only 3 balls of yarn, it is inexpensive (less than $30).