The non-producer this year . . zucchini.  That has never happened to me before.  I’m usually begging everyone to take zucchini.  I believe I’ve had 3 or 4 zucchinis this year.  My yellow squash did amazingly well but it’s done and I’m not sad to see it go.

Back to the eggplant . . I’m trying to save as much of it as I can.  I made all that eggplant parmigiana a couple of weeks ago and this weekend, I made more caponata and froze it. 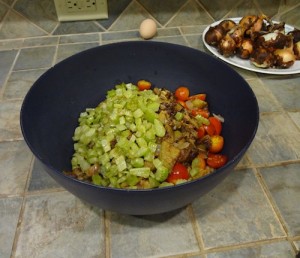 I promise you that’s not the same egg always back there.  I never even notice it til I see it in the picture.  We go get the eggs several times a day but it seems there’s always one late laying hen and when we go to close them up in the evening, there’s one egg.  I just leave it on the counter and then put it in the carton with the next day’s eggs.

For the caponata, I browned eggplant, onions and celery, then added some halved cherry tomatoes. 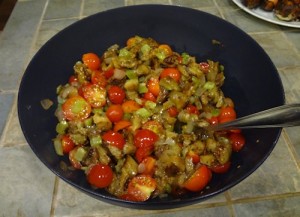 I stirred in some balsamic vinegar and will add the olives and other seasonings after it’s thawed and before serving. 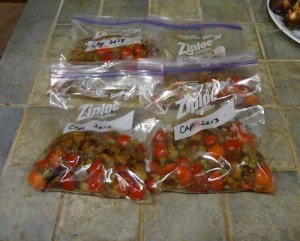 Two cups went into each of four bags.  Once I add the olives, capers, seasoning and a bit more balsamic, there will probably be about 3 cups of caponata per bag.  I’m going to leave this in the freezer probably til the end of the week, take one bag out and try it and if it works, I’ll put up more.

We love caponata but the eggplants in the store here during off season usually aren’t very good so if freezing this works, using home grown tomatoes and eggplant will be fantastic!