Let me begin with a caveat:  Any time I say something on here that doesn’t sound quite right to you, please check it out for yourself.  Don’t always assume I know what I’m talking about!  Really!  Ask Vince!  🙂

Yesterday a reader commented that she was not aware that dehydrating food made it safe for storage outside the fridge or freezer.  She thought only canning was safe for that type storage.  I wouldn’t want to poison any of my readers so I did some research just to confirm that it’s safe and that we haven’t just been lucky through the years.  Yes, if properly dehydrated, foods are safe to store without refrigeration.  The recommended length of time they can be stored varies greatly depending on the source of information.  Some things I’ve read say the food is safe for one year, some say 5 years, some say 30 years . . and everything in between.  I have had dehydrated veggies that were great after 2 years but I’ve never kept any longer than that simply because we consume them.  Dry beans that you buy in the store are simply dehydrated beans.  Meat jerky is dehydrated meat.

I have never dehydrated anything and been unhappy with the results once it was re-hydrated.  I think potatoes, squash and eggplant are some of the foods I love dehydrating because I get so much better results than with freezing or canning.  One year I canned a bunch of eggplant because I knew I didn’t like it frozen.  All of it got dumped.  It was so mushy I could hardly even look at it!

So . . here’s how I dehydrate potatoes.  If anything looks suspect to you, as always, please do your research and make your own determinations about the safety of what I am doing.

First, potatoes have to be fully cooked.  They can be sliced and blanched but I’m not real sure if blanching means cooked through the center but potatoes really have to be cooked or they’ll turn black.  There’s a fine line between cooking til they’re just done and cooking til they fall apart.  I struggle with that line!  Methods I’ve tried:

Because of the number of potatoes I am usually putting up at one time, the last method works best for me.  Even the potatoes that fall apart, so long as it isn’t too many, I put the crumbles in the dehydrator too and use them in whatever I’m making.

Another reason I prefer the third method is because I sometimes make hash browns, which simply means I grate the cooked potatoes instead of slicing them.

The slices need to be uniform in thickness so that they will all dry at about the same time.  As you can imagine, very thin slices are going to dry way before very thick slices.  When loading the dehydrator trays, if I find slices that are a bit thicker, I place them near the back, closer to the heat source and fan.

Some folks use a mandolin or electric slicer but I find that I can slice enough potatoes to fill the dehydrator in no time just using a kitchen knife and I seem to have better control over the potato . . not that my potatoes are out of control but sometimes when using a mandolin or the electric slicer, the potatoes have a tendency to crumble more than when I’m hand slicing them.

Once the potatoes are sliced or grated, they go into the dehydrator.  Set the dehydrator temp at about 125º for about 10 hours, depending on the thickness of the slices and the amount of humidity in the house already.  For hash browns, or grated potatoes, I cook  them about 6 hours.  The slices need to be completely brittle.

For squash, I do not cook or blanch it — slice it and dehydrate it.  For eggplant, I do blanch it but cook the slices only about 3 minutes, then plunge into ice water.  I dehydrate the eggplant at about 110º.

When dehydrating anything, if the temp is set too high, there is a danger of the outside of the slices forming a “crust” that traps the moisture inside so even though most dehydrators have temp settings much higher than 125º, don’t be tempted to use it for veggies.

Once the potatoes are dehydrated sufficiently, I allow them to cool . . maybe half an hour.  You do not want to let them sit too long, especially if it is humid in your house.  They begin to absorb moisture immediately.  It isn’t like you have to work quickly . . but you don’t want to forget them out overnight.

I vacuum seal them, either in bags or in Mason jars, using my FoodSaver.  I have just a standard, every day model . . nothing fancy or expensive.  We vacuum seal so much around here that we keep a spare.  We watch for sales and when we see a good sale, we buy one so that when ours goes out in the middle of the night, all I have to do is open the box and start afresh with a new FoodSaver.  Ours last 2 to 3 years mostly but we use it a lot!  There are more expensive, more commercial models made for heavy use but I’m ok with what we’re doing.

For anything dehydrated to keep, it has to be stored in an airtight container with as much air removed as possible.  Vacuum sealing is definitely the best way to do this.

For the batch I photographed, I sealed them in the vacuum seal bags because all my empty jars were in the shop and it was the middle of the night when I was doing this.  My preferred method for storing is in a Mason jar.  I put the sliced potatoes in a quart jar and the hash brown potatoes in a pint jar.  Those are the sizes that work for us.

But, for the pictures below, I will show how I did it with vacuum seal bags.

When using bags, because the potatoes are crunchy and sharp, I put them in zipper bags first.  I do not close the zipper bags.

I take several paper towels and fold them in half lengthwise.  I’m not being wasteful because I will use them for something else when I open this package.

Vacuum and seal.  Simple as that.

This is squash that I have vacuum sealed in Mason jars. 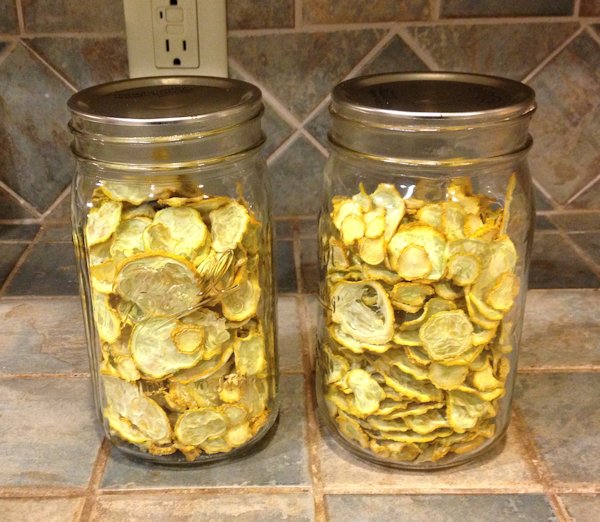 Over time, you will learn what size container and how much to use.  There are 4 or 5 good sized squash in each jar.  My dehydrator has 9 trays and it takes about 1 tray per squash if the squash are fully developed.  What’s in those two jars filled all 9 trays of my dehydrator.  There’s enough squash in each jar to make a full casserole recipe, which is what I like to do because I can divide it half, freeze one, and cook one.  Each one will be enough for at least one dinner and one lunch for the two of us.  If I decide to saute the squash in a little butter with onions and peppers, one jar will be enough for one dinner and one lunch for the two of us.  Because there are other ingredients in the casserole, each quart of dried squash makes 4 meals but if the squash is just sauteed, each quart makes 2 meals for us.

It is recommended that they be stored in a place away from sunlight or direct light (such as in a pantry) and the optimal temperature is about 60º.  That’s nowhere in central Texas!  I keep them in the pantry in my sewing room.  The thermostat in there is set at about 75º most of the time and that’s about as cool as anywhere around here.

I check the bags often (at least once a month) to be sure they’re still completely sealed and have not lost their seal.  For the jars, I make sure the “dent” is still down in the lid and I shake the jar gently to be sure none of the slices are sticking together.  Any sticking would mean moisture is in the jar.  If there’s any air in the bag, or moisture in the jar, I open it to inspect the contents.  If there’s so sign of mold, discoloration or mushiness, I cook those immediately.  If there’s any sign that the potatoes may be less than perfect, I toss it.

There’s one problem with this method of preserving food!  It’s usually late at night by the time I’m putting it in bags or jars and I have a bad case of the munchies.  I could eat all 9 trays of dehydrated squash.  It’s like eating a sweet potato chip.  I love those things!