Since Vince was in college and met his friend, Steve, who shared his waffle recipe, Vince had carried that recipe with him.  Not long after we were dating, he explained to me that he had the best waffle recipe ever.  That’s about the only waffle recipe I’ve used through the years but a while back I tried the King Arthur Sourdough Waffle recipe.  Vince loved them and said they were equally as good as Steve’s waffles but in a different way.

I got to thinking about it and decided to try something a little different — kinda combine Steve’s recipe with the King Arthur recipe and . . now I have the perfect waffle recipe!  The recipes were both very similar but by beating the egg whites til stiff and adding them to the batter, it made a huge difference.  Too bad I waited til the last batch to remember to take a picture.  I didn’t have quite enough batter left to fill the waffle iron but these were so delicious!  They’re a tad crunchy, light and tender on the inside with just a hint of sourdough flavor. 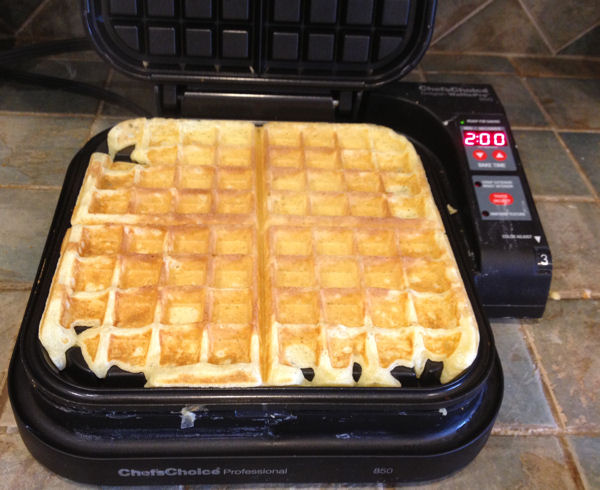 Mix all ingredients.  Cover and leave sitting on the counter overnight.

Using a mixer, beat the egg whites til stiff.  Set them aside.

In a separate bowl, mix the sponge, egg yolks, salt, soda and vanilla.  Add the egg whites and stir til thoroughly mixed.  I use the mixer.

Pour batter into preheated waffle iron and cook according to the manufacturer’s directions.

This made 12 waffles and the extras go into the freezer, to be popped into the toaster during the week when we want waffles and don’t want to take the time to make them from scratch!