The third chicken run was mostly finished over the weekend and I feel like a huge burden  has been lifted. 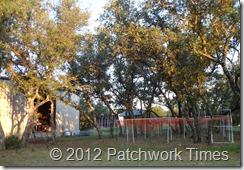 It was hard to get a good picture but it’s for the original 14 chickens.  They had a small temporary run but now they have their permanent run.  The temporary run was about 8’ x 12’ and the new run is about 25’ x 35’.

Saturday Vince had put up the poles and the chicken wire and all he needed to do was take down the old fence and tie in the new fence to the walkway that goes into the coop, and then cover the whole thing. 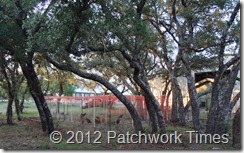 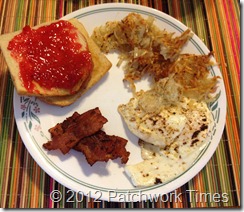 We came in and had breakfast – eggs, bacon, hash browns, toast with raspberry jelly – and when we were done, we went back out and the chickens were loving their new run.

They flew, and ran, and scratched and chased grasshoppers.  I think they love it!  We still need to bury some chicken wire around the edges and anchor the bottom of the wire to the ground but for now, they have a bigger run, completely covered and safe.

I’m thinking that this might be the week I get my first egg.  I’ve checked the egg boxes a dozen times a day for the past few days.  I’ll be so happy to see that first egg!