My weekend resolution was that I was not canning one single thing til Monday.  I may pick and shell peas but they’ll go into the fridge til Monday.  I am not canning this weekend.  One reason is that my canner has been hijacked for another purpose this weekend.  Another reason is that there were some other things I wanted to make and with a kitchen the size of a small peanut, there’s only room for one project at a time.

I thought I explained to the garden that I didn’t want any produce this weekend but I guess it just didn’t comprehend what I was saying! 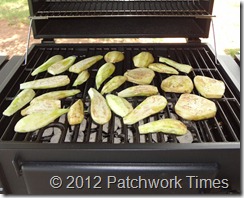 Vince is the grill starter around here.  The new grill has a propane starter so I think from now on, I’ll just start it myself.  Do you ever think that your husband does things just to get out of having to do it again?  I asked him to put the charcoal on the grill and get it started.  He knew what I was going to grill.  Can you see how much little charcoal is on there?  He told me the grill was ready and I asked if there was a charcoal shortage.  Last time we were in Abilene, it was on sale at Lowe’s and I think we bought about 10 huge bags.  There was no way this was enough charcoal so he added more and re-lit it and then I got the show on the road.  I grilled all the eggplant I had picked this morning.  Some of those will go into Caponata.  Some will get frozen for the next time I want to make Caponata. 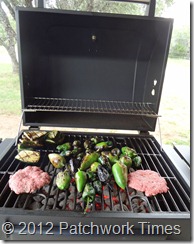 Next went zucchini.  The zucchini are producing like . . well, zucchini!  See the nice hot coals after we added more charcoal?  Good help is sometimes hard to find!  We had grilled zucchini with our hamburgers.  Also on the grill are peppers.  I picked every pepper that was needing picking – there are ancho, poblano, pimento – everything went onto the grill, got roasted, the skins were peeled off, seeds were removed and they were frozen.

I’m trying to talk Vince into picking our big watermelon.  I sure wish I could see for sure if it’s ripe.  I’m afraid if I leave it too long, it will rot or a critter will get it but if I pick it before it’s ripe . . that’s not good!  He said he would go out with me in a few minutes and thump it.  I keep thumping on the ones I know aren’t ready and then I thump the big one and I think it sounds ready . . but what do I know?