Don’t even say what you’re thinking.  I’m thinking the exact same thing . . She doesn’t need another project!  She has too many projects to finish!  She has a garden!  She’s doing Camp Loopy! 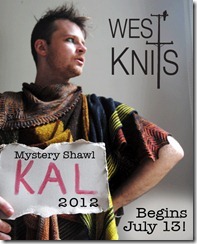 See . . I told you I’d thought of all the reasons why I shouldn’t join the knew Stephen West Knit Along.

His patterns are so popular.  I’ve wanted to make almost everything he’s done but I’ve never made any of his patterns because . . they require changing colors and I don’t know how to do that but I’m not going to learn any  younger, right?

This new one starts July 13, smack dab in the middle of the the second Camp Loopy project but I’m still doing it.  The yarn will definitely come out of the stash.  I’ll go dig though the possibilities later today.  Of the yarns he’s suggested, the only thing I have is Wollmeise.  I’ve checked yardage and weights and Lorna’s Laces, Malabrigo Sock and Skein Top Draw should work too, although they will require a bit of a second skein for Color B.  Even Color A is cutting it close so I probably would only choose these if I had two skeins of both Colors A and B and I’m not sure I have that so I might have to break down and use some of that Wollmeise!

Anyone want to do this with me?