These little bantam chickens are so funny.  There are two that are similar and have similar personalities but the other three are so different.  We just love spending time watching them.  See those black ones in the background?  Those are some crazy chickens! 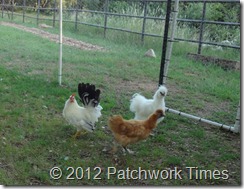 Of the five bantams, the brown one is Tiffany.  She’s so prissy and she’s very shy.  Any little unusual sound or gust of wind and she runs to one of the other chickens and gets as close to them as she can.  She’s very timid but she’s such a sweet girl.

I love Roscoe.  He’s a strutter.  He thinks he’s king of the coop and I guess he is.  He has the black tail feathers. He crows his little heart out but he doesn’t have a very big voice so he doesn’t bother anyone.

The third one in the picture above is Thelma.  There are two that look just alike but one is bigger (Thelma).  The smaller one is Louise.  They have big black eyes and they both love Vince.  Maybe they like to shop!  They’re so white and so very fluffy and soft. 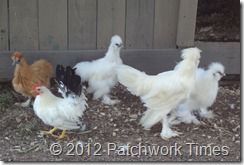 It’s so hard to get a picture of Otis with his huge, feathery feet.  Vince keeps saying “Poor Otis!  He’s just not right!”  I think it’s his feet.  He has to walk with his legs so far apart because his feet are really so big and they don’t have just a little bit of feathers on them . . it’s like he has a whole second set of wings on his feet.  Huge feathers!!  And his little top knot . . the other Silkies have just little soft, fuzzy type feathers on their head.  Not Otis.  It’s like he has a wing growing on top of his head.  Long, spiny type feathers. Poor guy!

The bantams aren’t good for much . . they don’t lay much and the eggs will be real small.  They make good mothers and will hatch out eggs from other hens if needed but mostly . . they’re just cute and cuddly little pets!