There are still tons of boxes in the shop and upstairs above the sewing room.  We mostly have everything unpacked that we need to carry on our routine so, in theory, everything still in boxes, 10 months after the move, should be donated or tossed.  That’s the theory.  In reality, there’s still lots of good stuff in those boxes.

It’s so hot inside the shop and especially upstairs so any digging through boxes has to be done very early in the mornings.

Over the past few weeks, every now and then I wondered where my La Cloche might be.  I asked Vince if he had seen it.  Nope . . had not!  In MO, I kept it in the drawer under the stove and I was wondering if maybe it had been left there. I’m wanting to make more and better bread and I needed that pan.  Last night, I even went so far as to put another one in the shopping cart and then I decided to diligently search for my old one before ordering another one.  Good choice, huh?   That’s one of the reasons we have so much stuff . . it’s easier to buy new than find the old. 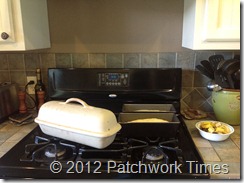 It rained last night so I didn’t have to water the garden this morning.  After getting a batch of bread stirred up, I went right out to start digging through boxes before it got too hot.  The very first box I opened had some of the black iron skillets that had been in the drawer under the stove so I was feeling pretty darned lucky.  Also in that box was the bottom to my La Cloche.  I couldn’t believe that with the hundreds of boxes, I found it in the very first box.  But, the box was completely unpacked and no lid was found.  For over an hour, I searched through boxes.  I tried to match up numbers . . you know how all those boxes have United Movers’ numbers on them.  You would think if the bottom was in box #079, the top might be in either #078 or #080.  Not so!  It was getting too hot to stay upstairs so I decided to quit for the day but then figured I’d open some of the boxes that were downstairs and see if anything looked like it might have been close to where the La Cloche was stored.  Finally, another hour later I found the top!

I’m amazed that I found it and further amazed that the two pieces weren’t packed in the same box but . . it’s found and that’s what matters.

While searching through boxes, I found a few other goodies and I’m going to try to spend at least one hour every morning unpacking some of those boxes!