Last night I had decided not to water the garden since I had watered it so well yesterday morning.  The plan was that I would come in early and knit.  Ahh, an early night in my chair and progress on the first Camp Loopy project.

Vince was out tilling up the spot where he’s going to put the grapevines.  I fed and watered the chickens, caught the escapees for the third time since noon and went to fill the watering tub for the cows.  It’s been yucky for a while but it has no valve to drain it and the guy who owns them says it’s ok.  It was getting worse but when I looked in before turning the water on, there was a dead bird in there.  Now why was there a dead bird in the cows’ water?

Vince was busy with his tilling and wasn’t happy when I told him that he had to come fish this dead bird out and the cows  couldn’t drink the dirty water that was now contaminated by a dead bird.  He said “What am I going to do about it?”  Simple!  Drain the tub, scrub it and put some fresh water in there!

We got the Softscrub with Bleach, a new toilet brush that had never been used, and a bucket and we loaded it all into the RTV and off we went . . down to the gate and back down to the water bucket. 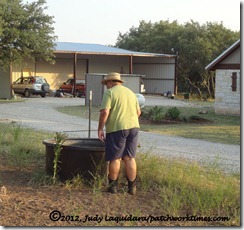 I’m sitting in the RTV . . in the driver’s seat . . with the keys . . with the motor running.  No, not really . . the motor wasn’t running but I was ready to take off and leave Vince if the bull came up.  Vince doesn’t like dirty, nasty stuff.  Let’s just say that show “Dirty Jobs”, you won’t ever find Vince on there!  He’s fishing the bird out in this picture and I think he’s formulating a plan in his head about why he shouldn’t attempt to clean out this nasty water. 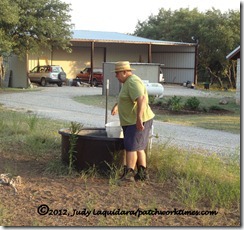 Then he must’ve decided that dealing with the murky, stinking water was easier than convincing me that he wasn’t going to clean it out.  He began dipping and he was walking over to some trees to dump the water but after a while it was all draining back towards him anyway so he just began dumping it on the ground. 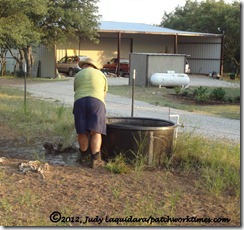 Oh, he doesn’t like to get nasty.  Neither do I but . . I’m a girl!  He was griping the entire time.  I think I heard a few four letter words.  I was glad the cows weren’t around to hear what I was hearing.  I think somehow he had figured out that this was all my fault.  My fault the water was dirty.  My fault the bird died.  My fault he was probably going to die too from standing in this dirty, stinking water. 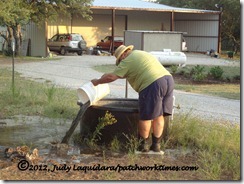 Oh, great!  He found a little piece of styrofoam on which to stand in order to keep from getting his feet wet.  I said “Aren’t your boots waterproof?”  No!  They are NOT!  Then I said “Well, why did you buy them?” And, I think I heard more of those four letter words and decided we’d better change the subject.  And the next subject was . . The cows are coming! 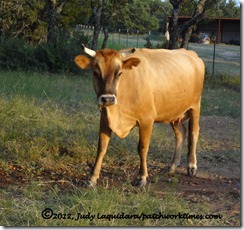 She wanted to know why we were there.  Why were we on her side of the fence? Why was there so much mud around the water tub?  Why was Vince dumping all the nasty, stinking water.  Then, I think she said “Are those boots waterproof?”  All we wanted to know was . . where’s that big, black bull? 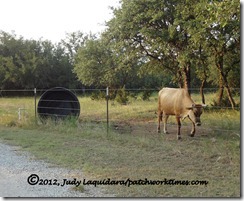 Then Vince dumped the water tub and turned it on its side and we left.  We decided the rest of our job could be done from our side of the fence . . safely behind 6 strands of barbed wire.  It’s a good thing because all the rest of the cows appeared . . including the bull. 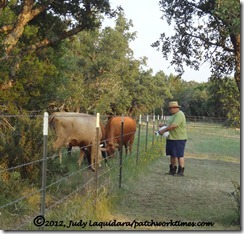 Vince took a break from scrubbing the tub to go give the cows a treat.  They know he’s so easy and they can always convince him to stop working and feed them something.

Excuse me . . but we have a job to finish down here! 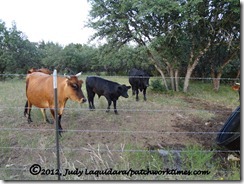 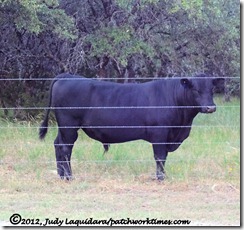 Wouldn’t you be scared of him?  He has mean eyes!  He looks at me like he thinks he needs to show me who’s boss.  I know he’s here for a reason but I wish he wasn’t here.  I liked it better when we just had three nice girl cows and one bossy girl cow and four babies . . though they’re growing up and they’re all bulls too. 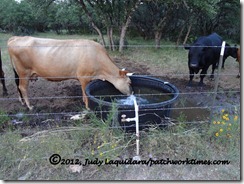 They couldn’t wait to get a drink of fresh water.   You would think since we sometimes go for days without seeing these cows that we could have just half an hour without them but . . no . . they are so nosey!  And, I guess they were kinda thirsty too. 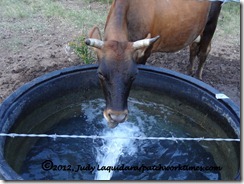 Can you see her using her tongue trying to get the water coming out of the facet?

At least they have clean water . . without a dead bird in it!