If you’re a canner, you’ve probably heard of Tattler lids.  The lids that most of us have used forever for canning are one use type lids.  Use them and when you’re done . . they’re tossed.  Some have commented that they’ve re-used those lids.  It is not recommended.  I don’t do it and I definitely don’t recommend it. 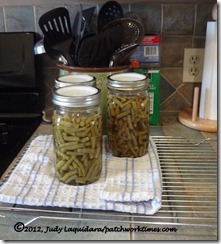 The white lids are the Tattler lids.  They can be used and re-used many times.  Some have reported using them dozens of times.  This is the first year I’ve used them and I’ve canned probably three dozen jars and haven’t had a single problem with them.  They’ve all sealed perfectly and have stayed sealed.  They do cost a good bit more than the throw away lids. 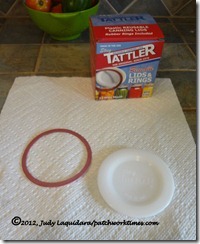 The least expensive place I’ve found to buy the Tattler lids is My Patriot Supply where a dozen wide mouth lids is $10.47.  The disposable lids are about $3/dozen so if the Tattler lids are re-used at least four times, they’ve paid for themselves.

Here’s how they work:  In the box are a dozen lids, either regular mouth or wide mouth, depending on what you’ve ordered.  The same size rubber rings are included.  They’re separate from the lids, but in the same box. 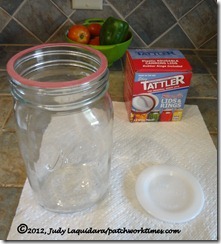 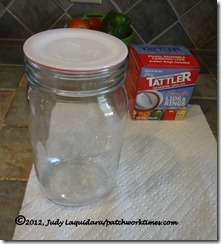 The lids are placed on top of the rubber ring.  At this step, the lid doesn’t always “seat” itself but I usually just mash it down to be sure it’s all the way down.  Regular rings are then placed on the jar and tightened.  When I first heard about Tattler lids, there were some complaints that involved the rings and it seems that some folks were tightening the jar rings with all their might and that was creating some issues. 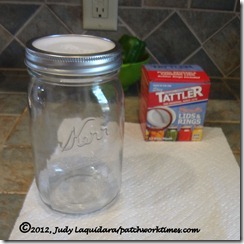 I tighten my rings “finger tight” . . not “Vince tight”.  That husband of mine can put the lid on the mayo that I can never get off!  I haven’t had a single issue with the Tattler lids and I feel so good having the lids that I can re-use.

Having said all that, Tattler is having a sale.  Beginning at 12:01 a.m. on June 8, they will have 25% off their 200 count mixed bulk package, which is 100 regular mouth and 100 wide mouth lids.  In order to get the discount, type in “special” in the coupon code area at checkout.  Even though I mostly only use wide mouth, I do use regular mouth for jams, jellies and most of my canned peppers so I’m going to order one of the mixed bulk packages.