When you walk out of the restaurant and see this: 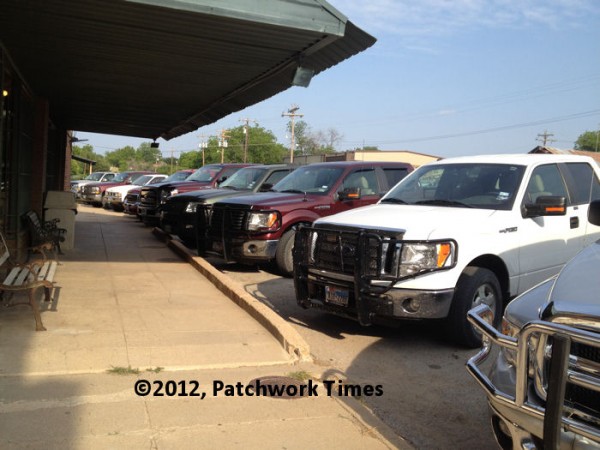 All pickups and one little Honda SUV . . ours!  When we walked out, Vince looked around and said “Don’t say it!”  I didn’t know what he was talking about til I saw all the pickups.  I keep fussing about not having a full size pickup.  I said “Let’s get up in the morning and go buy a truck . . first thing . . before breakfast!”  Vince said “We can’t . . Steve is coming over to help build the second chicken coop.”

Dang it . . if he’d just give me the checkbook, I’d go buy the truck because I’m not working on the chicken coop.  You can bet he won’t turn me loose to buy a vehicle . . ever.  I’d come home with a 1967 Mustang and he knows it.  I might do that some day anyway.

While at the restaurant, we had the cutest waiter.  He was a high school kid.  It was a little restaurant in a town about 25 miles south of us . . population in the 2000 census was 350 and this restaurant is known for having great fried catfish.  Our waiter was telling us a rattlesnake story and that story led to another story.  His cousin survived a rattlesnake bite.  He demonstrated how he shakes a stick through the weeds and how the rattlesnake sounds and how it crawls.  I was trying not to laugh . . heck, rattlesnakes aren’t funny but he was hilarious.  The rattlesnake story started because last night they had a rattlesnake at the front door of the restaurant and customers had to step over it til they could get it moved and he had to demonstrate how they did that . . without a shovel or a hoe.  Honestly  . . this is Texas.  You know someone had a pistol . . probably every one in that restaurant was carrying a pistol but I guess shooting a rattlesnake right there at the front door would probably not have been a good idea.

It looks like we could get a bit of rain tonight.  Send good thoughts our way please . . we so desperately need rain.  This summer looks like it’s going to be just like last summer with the drought.  It’s so hard to see everything dying and the tanks (ponds for you non-Texans) drying up.

After a long nap this afternoon, I’m going to sew til I see lightning, then I’ll go to the house and knit.  So many options!  🙂