Have you heard about “pink slime”?  If not, and if you dare, google “pink slime”.  It just makes me sick and angry and so frustrated that this is allowed.  Assuming it’s safe to eat meat with this “product” it it, who wants to eat it?  And why are we getting it and not even knowing we’re getting it?  Makes you wonder what else we’re buying/being served and we have no idea.

Aside from the pink slime, and before I ever knew about it, I was at the grocery store a couple of weeks ago and needed one pound of ground beef for a recipe.  I picked up a package of plain ground beef, 90/10 and it was about $4.99/pound (I can’t remember the prices, even though I went back to Kroger against just to look before writing this blog post).  Then I noticed on the package that there were three or four countries from which this meat could have originated.  The United States and Canada were two of them so I was fine with those two but the others, I wasn’t so fine with.  Then I saw the same 90/10 ground beef but it was the “Nolan Ryan” ground beef and it was $6.99/pound.  Then I noticed that the Nolan Ryan chuck roasts were $2.99/pound.  I remembered my meat grinder at home.  There were only two chuck roasts that appealed to me and the butcher told me they would have more the next day.  I got those two and asked Vince if he would go by there the next day and get 2 more.  You know Vince!  He came home with several more than the requested two. 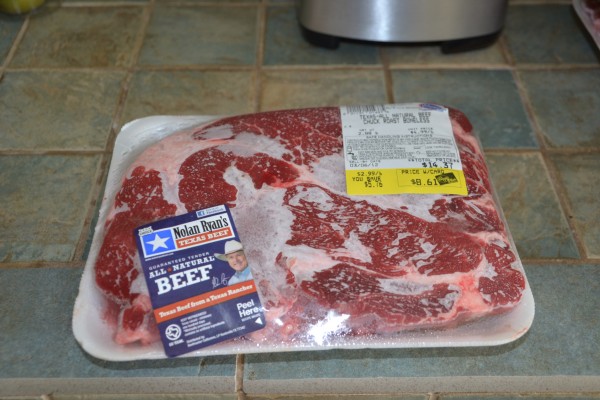 After trimming away anything I didn’t want included, which was hardly anything because I really like the Nolan Ryan beef, they were ground. 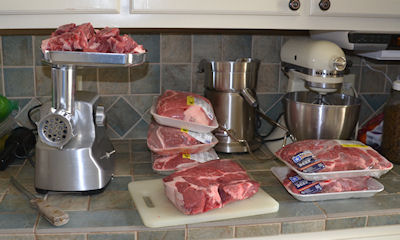 There’s no pink slime in this meat!  There’s no ammonia treated rejected parts in this ground meat.  I know that until we’re able to butcher our own cow, we have no control over exactly what’s in our meat but I feel a whole lot better about what I’m grinding here at home.

From the time I got the meat out of the freezer  until I put the packaged ground meat back in the freezer, and the grinder was washed and put away, took less than one hour! 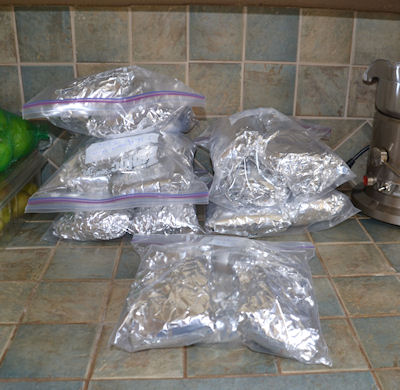 Just like with having a garden or animals, it’s a little more trouble to grind your own, and I wouldn’t do it for one or two pounds at a time but when I can buy good meat on sale, and grind a lot of it at once, it’s so worth it to have a better idea of what’s in our food.