Another day with lots of unpacking of boxes.   About the time I think anything we haven’t unpacked since August probably just needs to be donated, we find a treasure. 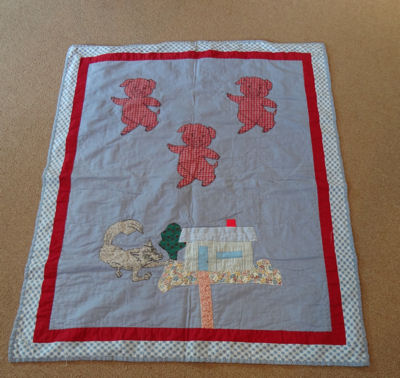 When I walked into the little quilt shop, The Calico Patch, in Lake Charles, Louisiana in the early 80’s, one of the first ladies I met was Ava Lee Broussard.  She was an elderly lady then but she worked part-time at the quilt shop and she took me under her wing.  She lived alone in an old part of downtown Lake Charles in a huge old two story home and I worried about her safety.  If you’ve ever passed down I-10 in Lake Charles, her house sat right off I-10 at Kirkman Street.  She did eventually move to a townhouse in Sulphur, Louisiana, near where some of her children lived.  Some of the early residents in that area were Lebanese and Ava Lee made some of the best kibbie I’ve ever had.  I worked not far from downtown and once a week I’d go to her house at lunch and have either kibbie or homemade hamburgers and a glass of lemonade for lunch.  She had herself a little garden in her back yard and on the days when it wasn’t too hot, we’d go out during lunch and pull weeds or pick tomatoes, green beans, cucumbers . . whatever she had at the time.

When Chad was born, Mrs. Broussard made this quilt for him.  He used it some but not much.  The three little pigs and the big, bad wolf!  Even though I thanked her and told her how much I appreciated this quilt, I doubt she ever know how much it really meant to me.   I know that quilts are meant to be used but I’m glad I kept this one and didn’t use it so much.  I’ll pass it on to Chad some day and he can do with it whatever he wants to do.  It will never have the same meaning to him as it does to me since I knew and loved Mrs. Broussard so much.

Do any of the quilts in your possession have any special memories that you’d want to share here?  There will be a drawing from the comments some time this evening for another $50 gift certificate.

Edit:  10:12 p.m. – Comments left after this time will not be included in the drawing.  Winner will be announced in a separate post.