Speck is very thankful for the storm door.  He loves to find a nice sunny spot for snoozing.  Can’t say that I blame him! 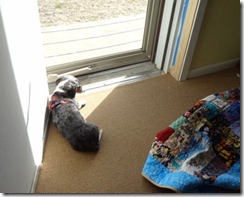 The other day Speck kept looking out the door and barking.  I didn’t think anyone would be out there but I went and looked.  Didn’t see anything; went back to sewing and he kept barking.  I never could figure out why but then when he wanted to go outside, he wouldn’t go out that door.  He wanted to go to the door at the front of the room.  I finally realized there was a tan (dirt colored) plastic grocery sack caught on the barbed wire way down by the ground and it was flapping in the wind.  Speck was afraid of it!  Even after Vince went and got the sack and threw it away, it was several days before Speck was brave enough to go out that back door and he kept watching over by the fence to make sure that scary plastic bag wasn’t going to get him.  That’s my watch dog!