Not much . . but there’s some fabric on my shelves.

Last night sleep eluded me and that so rarely happens.  I gave Speck a pain pill about 7 and it must have made him thirsty because he kept drinking and drinking and then I was afraid he would need to go out and I wouldn’t wake up but apparently he slept fine once he went to sleep.  When Vince woke up about 6, I was sleeping like a baby so I asked him if he would take Speck out and let me sleep for another hour.  He took Speck out but in a few minutes he came in and said “The electrician is coming and he’s going to turn the water off for a couple of hours.  Do you want to cook breakfast now?”  I wanted to say NO but I said ok so I got up and took a quick shower, made breakfast and cleaned the kitchen before the guys turned the water off.  They had to pull out the old electric lines and run a new line so we could wire the well pump up to where it will run off the diesel generator if needed.

Vince and I started putting together shelves.  Oh, I miss Chad! He and Vince always put the shelves together but now I’m the helper and can you believe it . . Vince threatened to fire me again today.  He doesn’t understand that his way isn’t the only way to do something or . . maybe I haven’t learned to pretend that his way is the best way to do things! 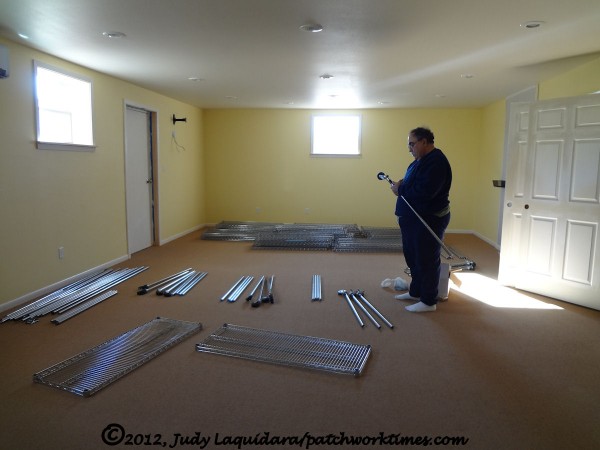 In Missouri, my bolts of fabric were stuck in every spot I could find to stick them so this time, we put together an extra shelf unit and made all the bottom shelves for the fabric bolts.  I don’t like bending over to put the fabric back on the bottom shelves so having the bolts there should keep things neater. 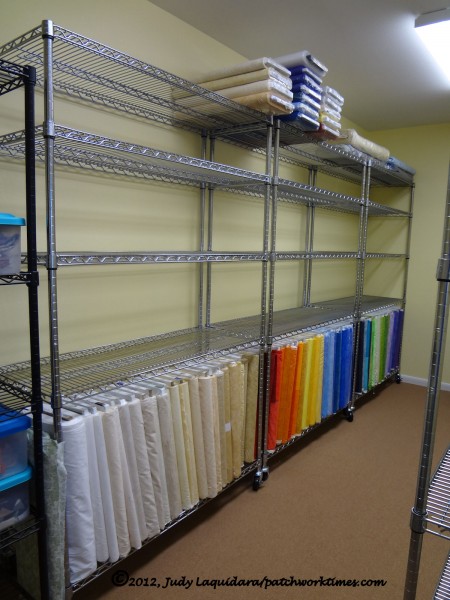 We thought we had some shorter silver shelves to stick on the left end but they were like the other silver shelves so we had to put black shelves at the end of the closet.  The bolts on the center top with their ends sticking out are duplicates. All the fabric wouldn’t fit on the shelves.  There are a few more bolts in boxes but for the most part, this is all the bolts. 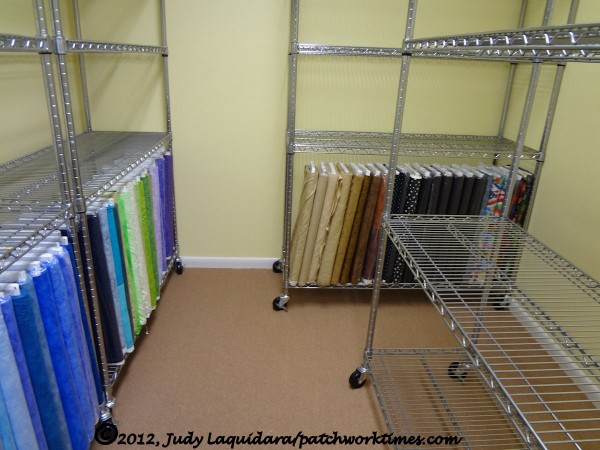 The blacks and browns and a couple of prints that I bought for backings are down on the end.  Progress but I’m telling you — moving and unpacking all this is tiring.  My bones ache!