While wandering around Walmart yesterday looking for a heavy duty food safe squeeze bottle, which happened to be on the row I thought it should be on but I somehow missed it the first time, I saw this. 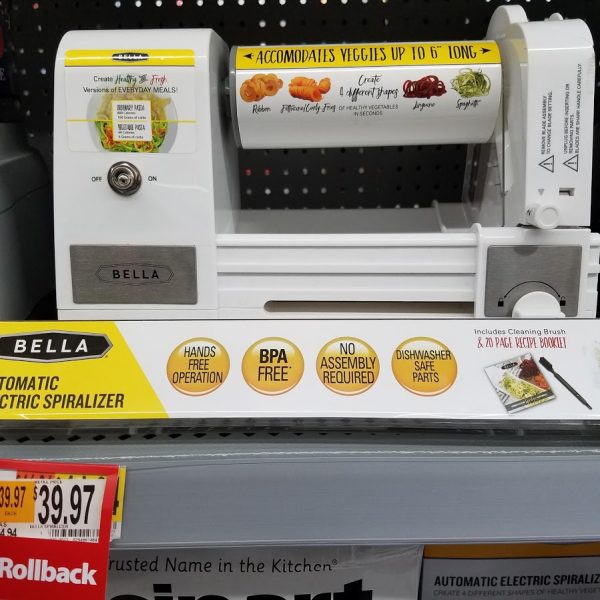 It’s an electric spiralizer. I was so tempted to get it but then I figured . . $39.97 for an electric appliance . . probably isn’t going to last long. My hand cranked one works fine. I use it often and it really isn’t that much trouble and it takes up a whole lot less room than the electric model.

I took Vince by and showed him.

Me: I’m tempted to get this.
Vince: If you would use it, why don’t you?
Me: I doubt it’s going to last long for $39.97.
Vince: So you’re not getting it because it doesn’t cost enough?
Me: No, I’m not getting it because they cannot spell “accommodate” and because, really, I use way more VEGGIES than I do YEGGIES!

Vince decided, probably correctly, that I really didn’t want it.

It’s kinda bad enough that so much of our manufacturing is done in another country but seriously, they might want to work just a little harder to get the display a little more accurate. I get really frustrated with myself when I go back and see typos and mistakes here on the blog so I feel bad for even laughing at those mistakes but they only had a few words to get right!

And, besides that . . they have what looks to be the exact same thing at Walmart online for $22.13.