Obviously I get on something and can’t seem to walk away. Right now, it’s pizza. I understand that some people totally dislike one thing while someone else loves it. I love cooking but I don’t like cooking just to have something warm to put in our bellies. I like trying new recipes and I love making the foods we really like. I suppose after getting that bad pizza a week or so ago, what really hit home for me is this: Why would we get in the car, drive to town, pay money for something that at best around here, is going to be ok . . when we can make it at home for a fraction of the price, not have to leave home and it would be amazing?

As the pizza posts have been read, and discussions evolved, my friend, Judy, shared a picture of her BBQ chicken pizza and then told me this is how she starts out: 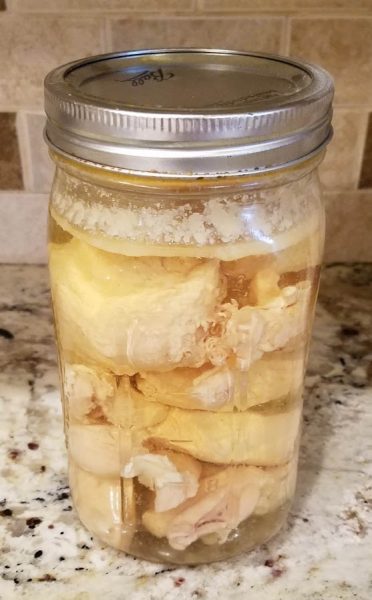 If you don’t have chicken and want to make BBQ chicken pizza, I’m pretty sure storebought canned chicken would be just fine.

Also, for this pizza, I made the crust using Noreen’s Pizza Dough recipe. It’s a bit easier than Peter Reinhart’s recipe. It tastes a bit different, maybe because Reinhart’s recipe recommends leaving the dough in the fridge overnight. Vince said he liked both recipes just fine.

About the crust – I can’t remember if I’ve ever had a storebought pizza crust onto which you add your own toppings. They may be excellent. For years, I convinced myself I could buy a storebought pie crust, unfold it, use it and it’s as good as a homemade crust. If it means pie or no pie, I’ll take the storebought crust. If I’m making 2 dozen pies to deliver around town, I’ll use a storebought crust but, if I want the best pie crust I’ve ever had, I’m making it. I can remember being a young wife and I’ve always loved pies and attempting to make a crust. They’d fall apart. I’d ball the dough back up and roll it out again. Sometimes I’d totally give up and sometimes I’d eventually get it to work. I can’t even imagine what I was doing wrong because I can’t tell you the last time I had a problem with a pie crust. Was it the recipe? No . . I sometimes use the same recipe out of Betty Crocker’s old cookbook. I can’t say for sure but I think I wasn’t putting enough water in it and it was staying too dry and even if I could get it all mixed together, it fell apart trying to get it into the pan. There was a whole lot of patching going on but I would eventually get that yummy buttermilk pie into the oven and then onto serving plates!

Experience. Never give up! I can make a pie crust lickety split without a problem. The butter needs to be cold so I don’t even have to let it come to room temp. If I want a pie now (and I’m thinking I might!), I can literally have that pie crust made, rolled out and in the pan before you’re finishing reading this post. Why would I buy a pie crust?

When Chad and Nicole got married, Nicole didn’t cook and had no desire to cook. She didn’t grow up in a home with a mom who loved to cook. Food to them was something to keep from being hungry. Chad loves to cook. I think he thinks about cooking all the time. Nicole realized what it’s like to sit down to an exciting, yummy, home cooked meal and now she’s totally changed the way she feels about cooking.

Most of us my age know by now if we enjoy cooking or not. If you don’t . . don’t let me pressure you into doing it but . . if you’ve never mastered a homemade pie crust or a pizza crust, and you want to do it . . give it your best shot at least one more time before giving up.

All I’m saying is . . if there’s some little desire to make it yourself or just see if homemade is better, try it once. I’m not going to say you cannot fail because we all know that what one person thinks is SO easy, the next person can’t figure out how in the world it can even be accomplished. Just try it once .. that’s all I’m asking. That can be your Christmas gift to me. Try making Noreen’s Pizza Dough recipe just once! And let me know how it goes.

Back to the pizza crust . . I can’t say if the storebought crusts are amazing. They may be. For Noreen’s recipe, I got six probably close to 12″ crusts from about 6 cups of flour, a little yeast, a little salt, a little oil and water. Why wouldn’t you take a chance on making that? Half the recipe if you don’t want to make so many crusts. Again, I tell myself . . not everyone likes to cook. I don’t enjoy cleaning the house and I go way past when I should have done things before I stop and do them. That pile of clothes on the end of the sofa . . we’ve almost used everything out of the pile and they never got folded or put away. Confession is good for the soul!

How did I go so far from the intent of this blog post. Back to the pizza crust . . again . . I ended up with 5 good sized crusts for the freezer. As mentioned previously, my crusts are a bit smaller because I’ve had to chop off the sides of my wooden peel in order to use it in the outdoor pizza oven. I put my crusts into the oven with the wooden peel, dusted with flour, because they stick less than they would to a metal peel. I get them out of the oven with a thinner metal peel because I can slide it under the pizza, where the thicker, wooden peel tends to want to push the crust towards the back of the oven.

For the BBQ chicken pizza, instead of pizza sauce, I used two different kinds of BBQ sauce that were open in the fridge. Neither would have been my preference but that’s what we have now so I mixed them. One is too sweet for my preferences and the other is more of a vinegar based sauce but mixed, they were good. 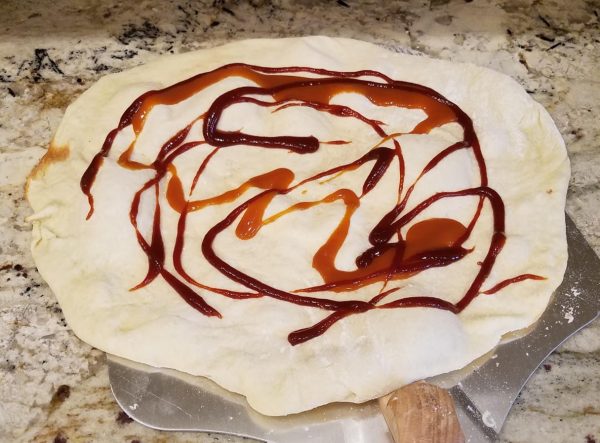 For the chicken, I drained it out of the broth, saved the broth for another use and shredded the chicken. 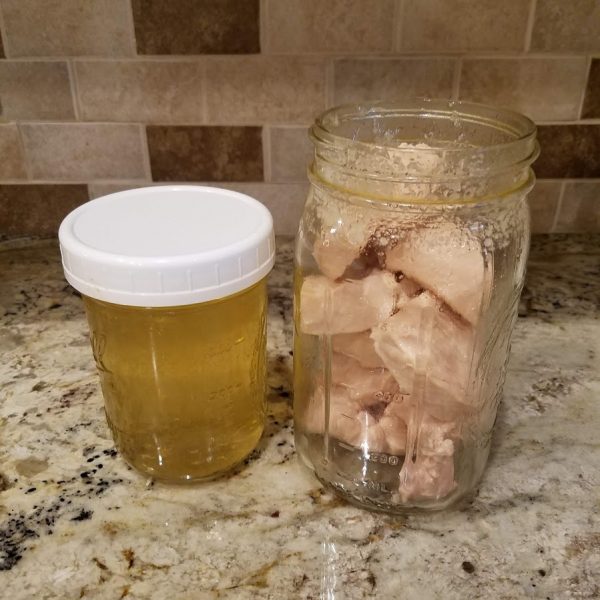 I could have cut it into chunks and browned it but it was going to shred at some point so I did it the easy way. 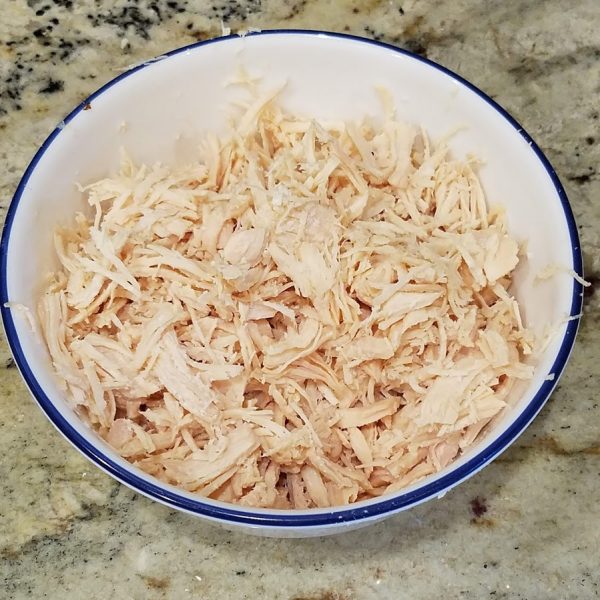 In a skillet, I caramelized some onions. They were just regular yellow onions. Purple or sweet onions would have been better but all I had were yellow onions. I removed the onions from the skillet, put the shredded chicken into the skillet, added a bit of both BBQ sauces. I could have done that in the bowl of chicken. It didn’t really need to be heated up.

Mozzarella was placed on top of the BBQ sauce (on the crust), then topped with the shredded chicken. 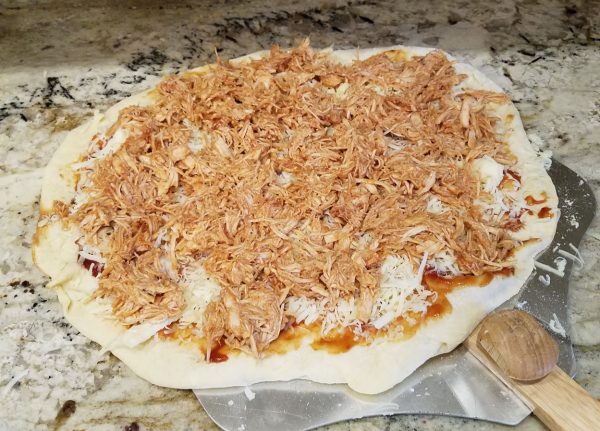 The caramelized onions, along with sliced bell peppers and jalapenos were added and it was baked. 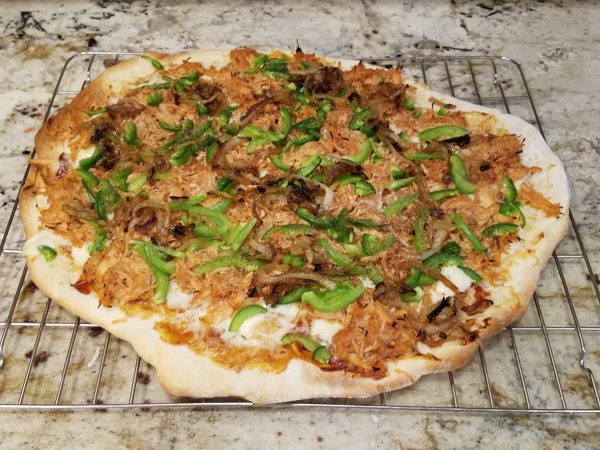 It was easy. It was quick. There are leftovers. What’s not to love?