Not everyone believes the way I do and, you have to admit that I do a fairly good job of keeping politics, religion and other controversial subjects off the blog so please, if you don’t agree with me, understand this is one post and not a trend.

I’ve mentioned it on here before, a couple of years ago, I was listening to a Focus on the Family show and a guy was telling the story of Norman. The old blog post goes into more detail about this tape. It was in 1984 that I bought that tape about Norman. I know I’ve listened to it 100 times. Friends ordered the tape because I told them how great it was. Many of them listened to it and it didn’t speak to them. I think it was just meant for me. We bought our Highlander in 2007. We were on the lot looking at cars. There were several versions of the Highlander. One didn’t have a cassette player. Vince said “We never listen to cassettes, right?” and he looked at me. I muttered “Norman”. He had no idea about Norman. Thank goodness, that version had a brand of tires he will NEVER buy so he went up to the next version that had Michelin tires AND a cassette player for Norman. Win/win. We both got what we wanted.

Now, even 34 years since I first heard that tape, I can tell you where I’ve kept that cassette in every place we’ve lived. When we moved here, I couldn’t find my tape. One day, I told Vince “I’m so sad. I think I’ve lost Norman”. He had no idea who Norman was. He didn’t remember that I needed a cassette player in my car because of Norman. I kinda felt bad for Vince because I met Norman before I ment Vince  but I knew he would not love the Norman story like I did. I did find the recording online and was able to buy it, so now the story of Norman is on my iPod and I eventually found my old cassette.

A bit like the Norman story, I seem to be drawn to helping people like Norman. I do give to various organizations but my heartstrings are yanked by individual needs I see.

This story is a bit vague because I want to leave out details but I think I can get my message across.

Several months ago, I saw a need and I felt God was telling me to give a certain amount to help “fix” a problem. There was no way I could solve the entire problem, but at the same time I felt like I was being led to give, there was an amount I knew I needed to give – not directly to the need, but to someone who could make a difference. I asked one person if there was something I could do to help. She told me who I should talk to about helping. Then, before talking to that person, I tried to talk myself out of it. That evening, I kept thinking of reasons why I should not give. There honestly were a dozen or more reasons why I should NOT do it. At the end of that day, I figured (1) This is not my community. There are plenty of others who could/should see this need; (2) There are government programs that should be filling this gap and my tax money should be resolving issues like this; and (3) Chad and Nicole are first time home owners and there’s a whole lot they need. So, I went to bed thinking I was going to push this out of my mind.

The next morning, I woke up and as I was deciding whether I was going to get out of bed or go back to sleep, the very first coherent thought that ran through my mind was Norman. I had not thought about that tape in months. I was a bit aggravated because when I went to bed, I thought I had put that whole giving idea to rest. Now, Norman had resurrected the idea. I went into the living room and began reading my email and the very first one was from Focus on the Family, where I first heard the Norman story. Coincidence? Maybe but I chose to believe that I had no choice but to do what I had originally felt like I should do so . . I did it. I never met the woman to whom I gave my donation. I had talked to her on the phone, told her what I hoped could be done with the money I was giving, she agreed. I put the check in an envelope, took it to her office. She wasn’t there so I left it with someone to give to her.

End of the story! I didn’t hear another word back from her. I never even checked my account to see if the check had cleared. I always feel that when I make a donation, especially one that I feel in my heart I HAVE to do . . once I make the donation, I’m done. Whatever happens after that is on someone else’s back. That’s not to say that if I make donations to an organization and I find out there’s fraud or misappropriation, I’ll keep giving . . I won’t but I don’t go back and expect to know where every dime of my money was spent.

Yesterday, I got my feathers ruffled a little. I felt someone was being overly critical and negative towards me and the things I do and it hurt my feelings.

Also, yesterday I knew I had two packages of yarn coming from Eat, Sleep, Knit. Vince went down yesterday morning and opened the gate. If the gate is open, they’ll come down to the house with our packages but if the gate isn’t opened, they take them back to the post office and I have to go get them. I was out in the garden when I heard the mail lady coming down our driveway so I went to meet her. I put the packages and mail in the back of the RTV and went back to finish up what I was doing in the garden. On the way back to the house, I got the packages because I wanted to wind some of the yarn for the reindeer hat. I brought the mail in, put it down and never looked at it.

I was just getting ready to go to bed and thought . . I never looked at today’s mail. I stopped by the table to see what was there. One piece was a card. The return address was just a last name (I do that often too), and an address. I’ve heard of the town but not even sure exactly where it is and couldn’t think of anyone I know who lives there. Then I realized, the last name was the same last name the lady to whom I’d written the check.

Almost two months later, and on a day when I needed to hear kinder words: 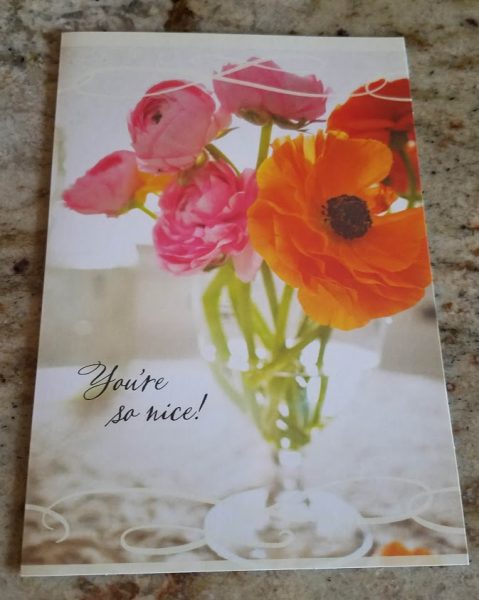 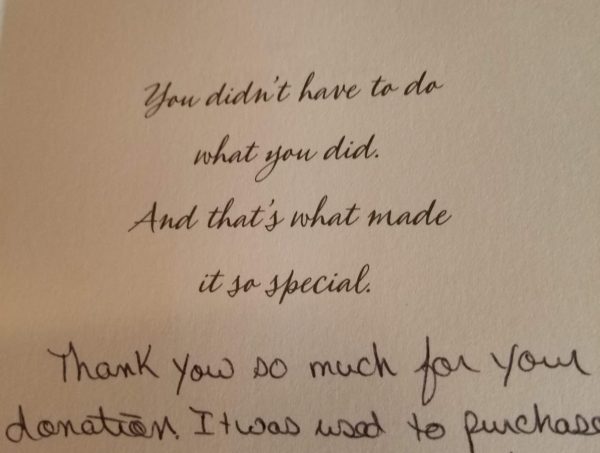 I’m betting the lady who sent the card had been meaning to send it for weeks and kept getting delayed. That card needed to be in my hands yesterday . . last night in fact. I’m usually opening the mail on my way back from the mail box. I can’t think of a time recently when I didn’t open the mail right away. But, it was fairly late last night that my feathers got ruffled. If I had opened that card when the mail lady brought it, I think I would have totally missed the message. It would have been just a card thanking me but last night . . it was so much more. I went to bed with a smile, thankful that I’m not the grumpy person who feels the need to share my negative thoughts.