Red beans, sausage and rice is one of Vince’s favorite meals. I like it but I don’t love it. 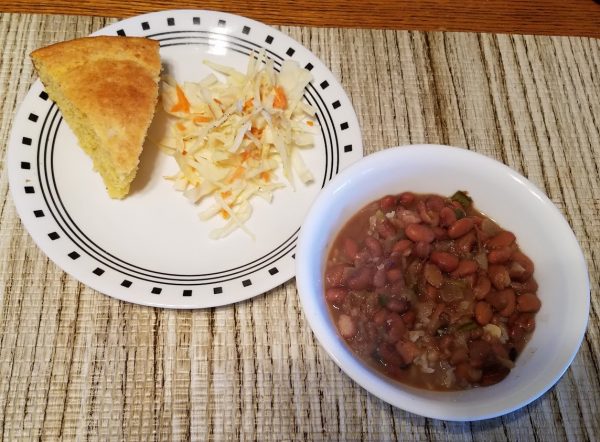 We had gone by the grocery store early this afternoon and I was tempted to buy a bag of pre-cut coleslaw but it was $2 or a small bag. I had a whole cabbage at home and it wouldn’t take long to chop enough for dinner so I saved myself $2. Yarn money!  🙂

We sat down to eat and Vince said “This is one of my favorite meals and it isn’t hard to make.” I said “Not hard for you!”  It isn’t hard. I soaked the beans overnight, rinsed them this morning, put them in the pressure cooker with a little bacon grease and seasonings, cooked them on high for 30 minutes. Then I added some sliced andouille sausage that I had browned, along with peppers, onions and garlic that I had sauteed in olive oil. When it was close to time to serve, I heated it all up, checked for seasonings, added a bit of salt and that was it. 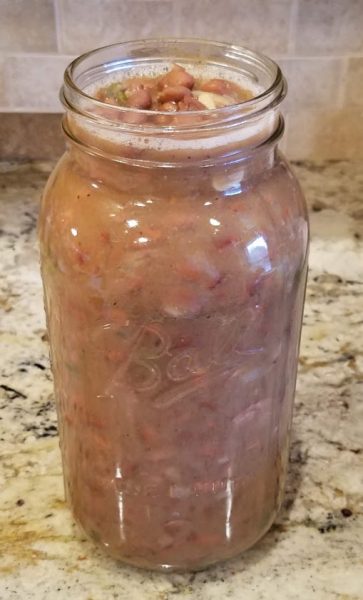 We’ll have this again Saturday and then there should be enough to freeze enough in two containers for two meals later. Vince is right  .  . it isn’t hard to make and it’s really easy to make enough for quite a few meals without much extra work.