In my opinion, Cupcake Chicken is not a great name for this recipe. It just doesn’t sound right, but maybe that’s just me. I think of icing when I think of cupcakes.

Here’s how I did my cupcake chicken, start to finish, along with my thoughts.

The first recipe I saw for this chicken had the thighs going into a cupcake tin which had holes drilled in the bottom of each cup. I wasn’t crazy about that idea so I thought about using the aluminum throw away type cupcake pans and cutting holes in the bottoms of those. Then I read that most chicken thighs are too big for the standard cupcake pan and you have to use the jumbo cupcake pans and I doubt I could even find those in the throw away pans.

Next, I read a recipe that made sense. The guy said basically that by drilling a hole, you’re letting all the good chicken drippings drain out and then you’re adding butter back for fat so just let it sit in its own drippings while it cooks.

So, I used a throw away aluminum baking pan with no holes and yes, there was a lot of juice/fat. I’ll tell you what I did with that later.

You can probably figure that I combined several recipes and, in the end, probably made it up as I went.

I was going to cut the knuckle or joint out of the end of the thigh. Oh . . backup . . I do not like dark meat but I figured the thighs would work better for this recipe than a breast so I went with the thighs and I may never go back to breasts again.

I was going to cut out that knuckle thing at the end of the thigh. Could not find my kitchen shears. The other day I was in Vince’s shop and I saw something that looked like my shears but I thought . . no, he wouldn’t have brought them over here . . so I left them alone. I was in the kitchen digging through every drawer thinking maybe they got put in the wrong drawer while I was gone. Vince heard me and he said “What are you looking for?” My kitchen shears and I can’t find them. Vince said “Do you want me to go see if I have anything in the shop that might work?”  Hmmm . . what does that tell you? I’m thinking he borrowed my shears and never brought them back but, after a while, he came back with a pair of scissors . . not my kitchen shears, and so dull they would not even cut through the skin. This is the pile of knives I tried to use to cut through that bone. 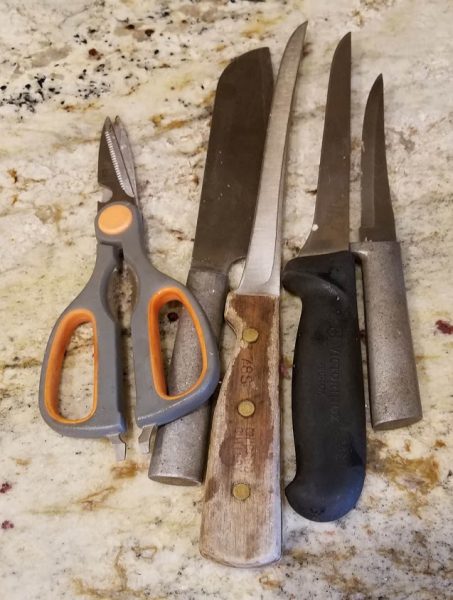 I sharpened them all and none of them would cut through those bones so I decided to remove the bones so I ended up using boneless thighs.

One of the recipes said to peel the skin back (do not remove it . . just peel it back and leave it attached) so I did that. Then I seasoned the breasts using these two seasonings, being sure to season the skin too. 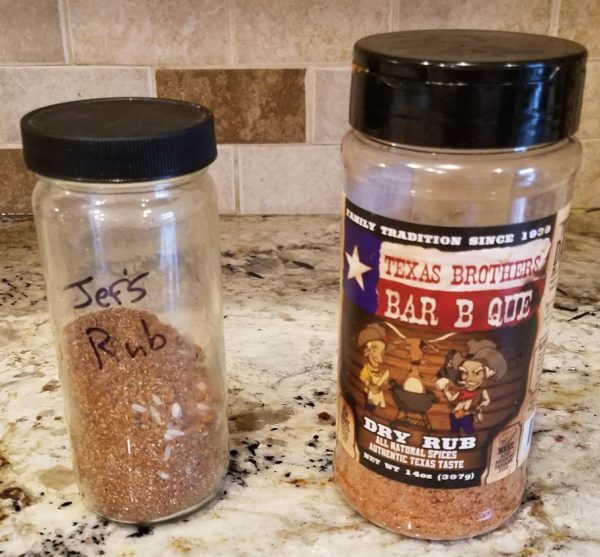 Don’t get too worked up over the seasonings to use. Salt, pepper, onion powder and garlic powder would be close to perfect in my opinion. 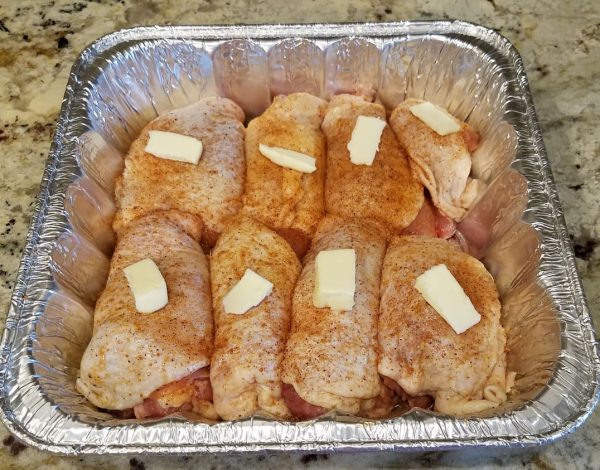 I kinda tightly rolled the meat up and wrapped the skin back around it. I added just a bit of butter on top to keep them moist til the fat began to render.

The went into the smoker at 250° for about 3 hours. I really don’t know how long it was because my knee was killing me. My thighs were so sore, as I expected them to be and . . I had a headache. Cedar pollen is starting to develop and it kills me so I took two aspirins and went to bed and I think I slept at least 3 hours. When I got up, I took them out of the smoker. 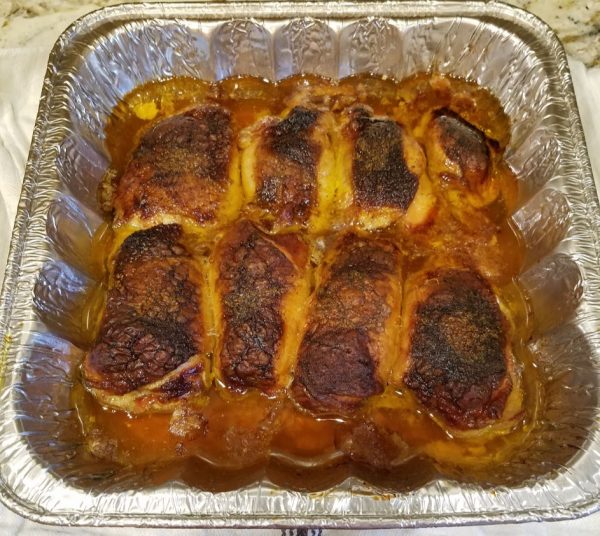 How good does that look? They were so very good!

Next, I took them out of the pan, put them on a rack over a baking pan, poured a little BBQ sauce over them and stuck them in the oven, set to “convection roast” at 375° for about 40 minutes. I had potatoes roasting for the potato salad so the chicken stayed in the oven with the potatoes. 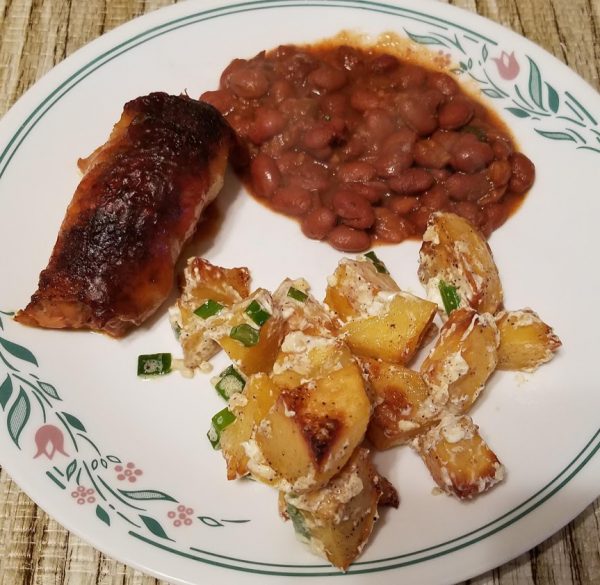 Seriously . . I cannot convey to you how good this was. Baked Beans, Cupcake Chicken and Roasted Potato Salad with Dijon Goat Cheese Dressing. I’ll do a separate post on the potato salad.

I’ve put off making the chicken because it sounded hard. It is so easy! I know I’ve written a lot of words (I always do!) but here are the basic steps:

About the fat from the chicken. 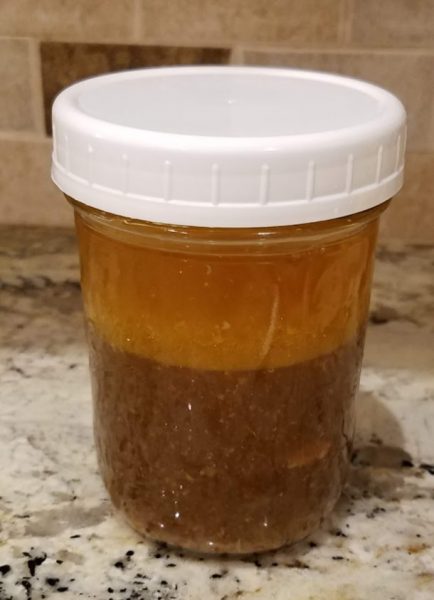 That’s a pint jar of chicken drippings. I’ll stick it in the fridge. The fat will get hard. I’ll scrape that off and what’s left will go into a pot of gumbo that’s on the menu for next week!

How’s that for not wasting any of it?