While driving to Abilene the other day, Vince and I were talking about various yarns. He truly is interested in all the different types. Today while I was the dentist, trying to be quiet and not talk while the hygienist had her hands in my mouth, and I again started thinking about yarn.

To a non-knitter, it’s probably how a non-sewer/quilter thinks about fabric. Fabric is fabric! They don’t even realize there’s stretchy knit fabrics, cottons for quilting, shiny, slippery fabrics for formal wear. That seems odd to those of us who have sewn almost our entire lives.

Probably the craziest socks I ever made were a pair I made for my dad. It was in January, 2013 and Simply Sock Yarn got in some qiviut and I decided to take the plunge and buy it. It was $88 per skein as I recall. In this blog post, you can read about why I decided to buy the yarn. In October, 2013, when I got ready to start making the socks, I realized I was going to need more than one skein of this $88 yarn to make a pair of socks for my dad. I tracked down another skein, again at Simply Sock Yarn, but was told that the dye lots probably would not match. They did not. They were so far off that alternating skeins was going to give me a striped look so I just went ahead and made them striped socks . . of sorts. 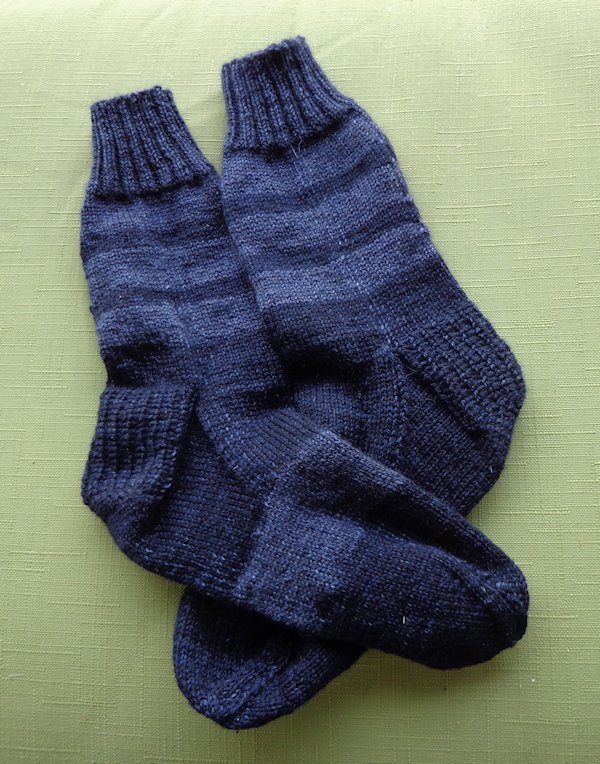 That’s just a funny story about my sock making!

Then, when I decided I wanted to make sweaters, the first yarn I was was a very, very soft worsted weight yarn which was a dream to knit but when I wore it the first time for a couple of hours, it pilled so badly that it looked like something that was totally worn out. I was so disappointed. That’s when I learned that the softer the yarn, the better the chance of it pilling. I still have two sweater quantities of that yarn and am not sure I’ll ever use it.

Through my research and complaining about that yarn, I learned about wool blends and wools that were not so soft. I also learned about superwash wools – wools that have been treated so they can be machine washed though I still hand wash all my hand knitted items.

Now, I’m in love with Norwegian and Icelandic type wools. They’re about as rough and scratchy as it gets but they hold up and they are great for fair isle knitting and they seem to get softer with wear.

So, on our trip, I was telling Vince about all this and he said “You should share more info about the different types of yarns! You seem to know a lot about them.” I said “Thank you for investing so much in my education!”

There is so much to learn and I hardly know anything about the yarns. I would love to travel to Iceland, Scotland, Norway . . some of the places where I could get some good firsthand explanations about their wools, tour the mills and see the sheep that produce the different wools. But, for now, I’m happy to make a few trips to Missouri. No use pushing my luck about going too much farther!