This past week was relaxing. Didn’t get too many JDs and pretty much just got to do what I wanted. I did get a spot in the garden tilled before the rains came and now we are waiting for it to dry out so I can plant the garlic.  Also, we had lunch with some out of town friends. 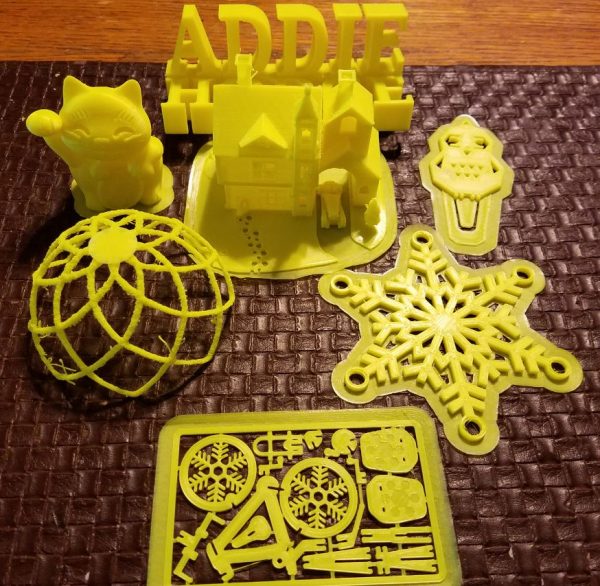 I did have a few things printed for Judy to see when she arrived home and it seems she was pretty happy with what I achieved. If you wonder why everything is yellow, it because the material used for printing (called filament) comes in big rolls, which takes a long time to use. If left out in the ambient air, the material absorbs moisture and that impacts print quality. I have other unopened colors of filament, but i don’t want to use them until I have a better way to control moisture. So for right now, its yellow or orange.

I saw where someone online had printed a nameplate and I thought that would be a good thing to try. There were instructions provided but they were hard to follow, mostly because I was not familiar with the design software being used. I tried to learn the software as I went, but it was too complicated. Not being one who gives up easily, I decided to try my hand a designing a name plate with another program (Tinkercad) which is much easier to use. I thought Addie could use a name plate and I wanted to make it in the shape of an L. Her first name is on the vertical part of the L and her last name on the horizontal part. After I had the design completed, I had to put it through another program (called a slicer) which makes the design understandable to the specific printer I am using. The sliced design was then loaded into the printer and I started printing right before going to bed. The name plate took over 5 hours to print. In the morning, I took a look and it worked well except for the E in Addie. The filament is hot and soft when it comes out of the printer, so when printing on the horizontal parts of the E, there was no support, causing issues with the filament. I should have known better but it was a good first hand learning experience. I went back to my design and added some supports that could be removed after the print was completed. Also, the slicer program can automatically add support, so I used that too. I restarted the print and 5 hours later, it was done. Bingo, it worked! Now I had too much support that all had to be removed, but better safe than sorry. A before and after picture shows you the difference in the Es. (The good one is on the bottom.) 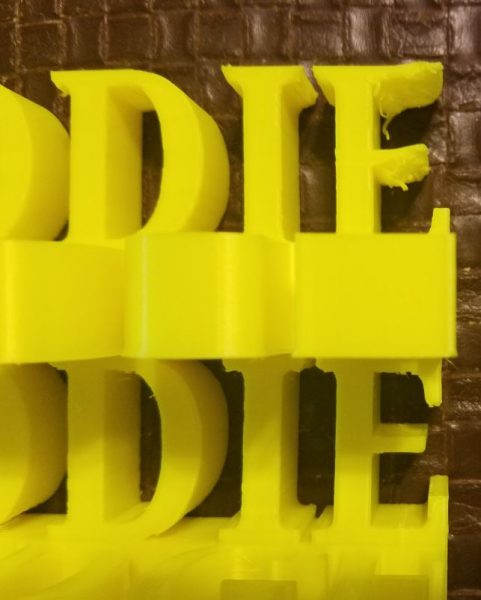 Now I have the printing bug pretty bad. There is a lot to learn so it will keep me busy for a long time. It even gives me something to do in the evenings when Judy is knitting and it might even keep the TV “off” for awhile!

Mushrooms are on the agenda for this week and more outside work if things dry up a bit.

One more important thing. Cat needs a warm place to sleep for the winter. We bought her one of those heated houses last year, but she wouldn’t go in it. This year I am going to work with an elevated platform and a heated mat. More to come.