We’ve had brussels sprouts every day since I tried the ones in the restaurant and I think I’ve hit the right combination. The balsamic reduction was right from the beginning so it was just getting the brussels sprouts cooked correctly that threw me for a bit. Here’s what I did that wasn’t perfect:

Last night, I hit on the right combination. Using the bigger brussels sprouts, I cut the core end off, removed the leaves. These are the larger, thicker leaves. I put those in a separate bowl. Then I cut more of the stem end off and removed the smaller, more tender leaves and put those in a different bowl. The leaves from the first bowl (thicker leaves) went into the steamer for about 3 minutes. I drained those really well on paper towels, combined them with the second bowl of tender leaves, tossed with salt, pepper and olive oil. I was going to use the air fryer but had something else in the oven on convection so I stuck them in there. Got busy and let them cook a minute or two longer than I should have but we both loved them. They were crunchy! 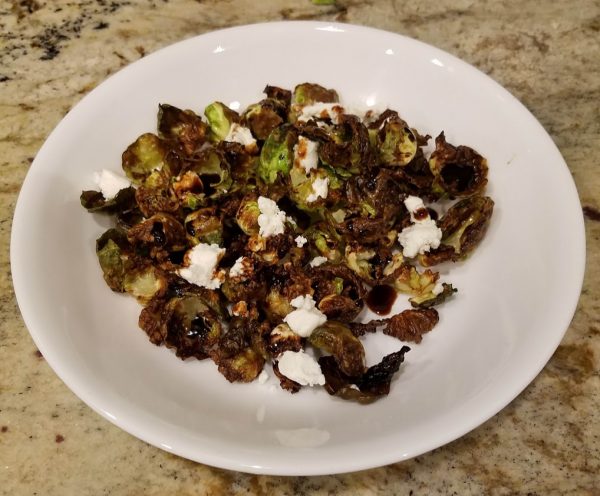 The balsamic reduction is simply balsamic (I used raspberry) with a bit of honey, cooked down til it’s the texture of a thick syrup (think . . chocolate syrup). That syrup was drizzled over the warm sprouts and then the goat cheese was crumbled on top.

I paid about $2.50 for the bag of brussels sprouts at Walmart and didn’t use probably 1/4 of the bag.

We won’t continue to have this every day but we will be having it often. It’s easy, fairly inexpensive and should be pretty healthy.