After getting the apples in the freeze dryer yesterday, I turned to catching up on the “brewing” going on in the kitchen.

Before I went to MO, I divided up the kefir grains. There weren’t many grains so I wasn’t sure if either jar would survive. The grains I left at home didn’t make it. Vince had never done anything with them. I gave him a 2 second lesson and he kept saying he didn’t see the grains and before long, he decided he accidentally drank them so I was careful about keeping the grains I had with me going. I brought them back, kept them in the cooler while traveling and in the hotel and they did just fine . . we had a new jar of kefir this morning. 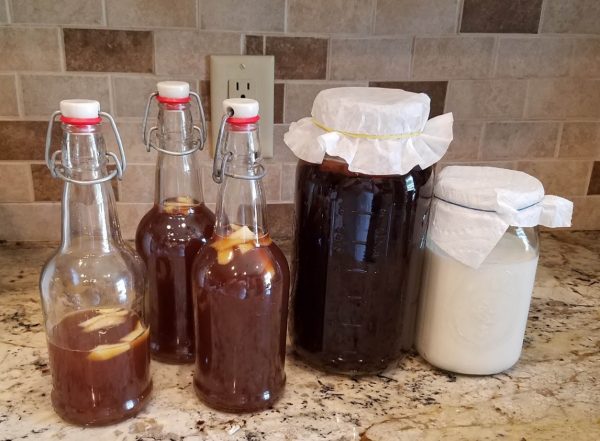 I had stopped making kombucha and when I started it again, and got the new SCOBY, the recipe that came with it said to use black tea. I like green tea better so next brew, I’m going to switch to green tea and switch back to my gallon jar. With the half gallon jar, I got about 2-1/2 jars of tea to ferment for the second ferment. I drank a little of it before bottling it so I would have had 2-1/2 bottles if it had all gone into the bottles.

For this batch, I had apples handy so . . apples were added. I’ll probably leave these sitting out til Thursday and then test them to see if they have enough fizz for drinking.