Before I left, one of our overhead living room bulbs was out. There are four bulbs in the fixture. When I came home yesterday, I kept thinking it seemed dark. I looked up and another light was out so two out of four were out. Vince changed the bulbs and left the two burned out ones on the table. He said “Don’t throw those away!” OK . . I was too tired to even ask questions.

Yesterday morning when I was fixing breakfast, he said “Don’t forget – don’t throw out those bulbs!” I said “Why?” and he said “There are components I want to save.” Really?? I said “Why don’t you put them somewhere because without even thinking about it, I’m going to throw those bulbs out.”

Later, he came back into the house and he had this: 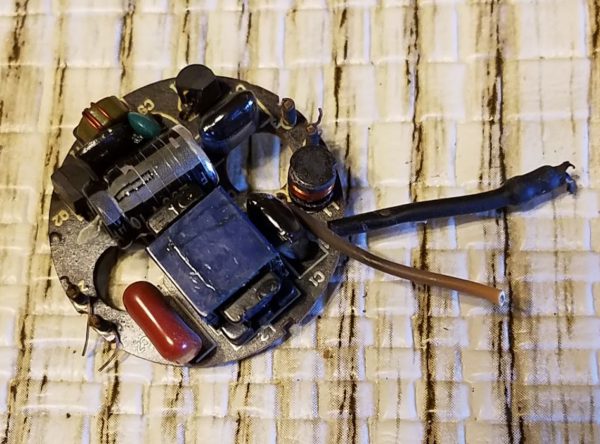 He tells me that this can be used . . maybe . . as components for other electronic things he’s dealing with.

There’s no end to the amount of stuff that man can collect but knowing Vince, he’ll find a good use for it and before long, I’ll be saying “I’m sure glad you saved those things!”