Someone Chad knows had a Kentucky Coffee tree that was down. Not sure if they cut it or how it ended up down but they knew Chad used wood asked Chad if he wanted it. As he began cutting it up, he and Nicole loved the grain and color so they decided to make a big chunk of it into a mantle.

There’s a sawmill somewhere between here and Kansas City that Chad likes so he too the piece of tree up there and had them cut it into the size he wanted for his mantle. 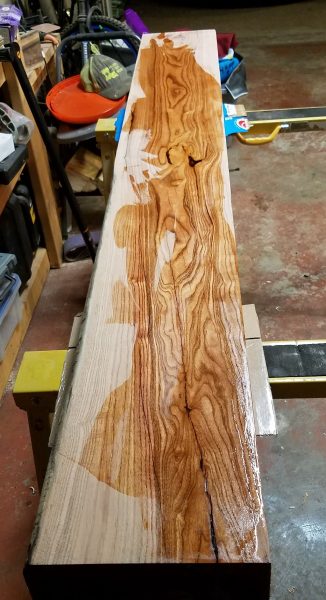 In the photo, he has the epoxy spread out over the cracks and imperfections. I think I took that picture after the first coat of epoxy and he’s now put on three coats I think. Once it’s ready and he has time, he’ll sand it down, then put a stain or clear coat of some kind on it and they’ll have a gorgeous mantle from a local piece of wood and that they made themselves. The outside edge that will show most still has a bit of bark on it but it isn’t completely bark covered.

I doubt it will be finished before I leave but I’m excited to see it finished.

I said to Nicole this morning “If you ever sell this house, you need to be sure to take the mantle with you!” She said “Oh, don’t worry . . we will!”