Tell me why some socks I finish in a week and some I start in January and finish in October! But, then there are socks that I started over a year ago that still aren’t finished so . . who knows why I do what I do. 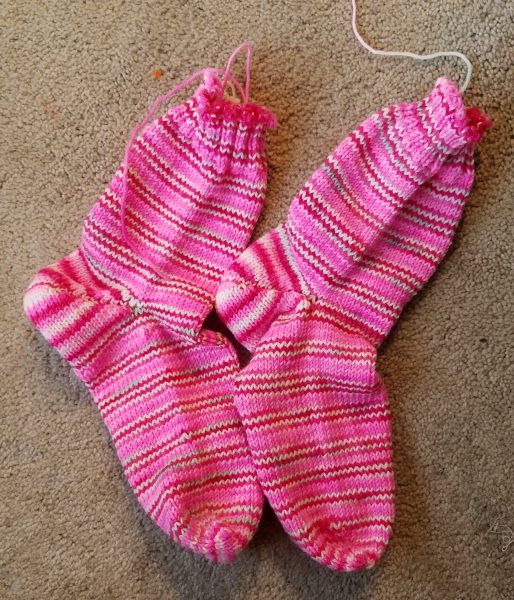 They need blocking and I need to tighten up the stitches at the heel. This was my second time to do the short row heel and I still had a few loose stitches.

Glad to have them done. I had hoped to get the green shawl finished and lots of work done on it today but the garage door man came to work on Chad’s garage door. It was funny – when I called him to come work on the garage door, he had me spell my last name. He said “I’ve done work for you before!” I told him, yes, we lived on Timberbrook and he said “My brother bought that house!” I said “I love that house” and he said “They do too!”

When he was working on the garage door, he asked me if I still use my electric smoker. I guess I had it going the day he was working on our garage door. It’s funny. I hardly knew anyone here and when I left, I never thought anyone would know me when I came back. Several people this week have spoken to me at Walmart or in the grocery store and they remembered me from the quilt guild or something.

He fixed Chad’s door . . and as he was walking out the walk through door, he said “I can fix that too!” The grabber thing wasn’t working and when you let go of the storm door, instead of smoothly closing, it slammed shut. They never use that door because if they’re home, the garage door is open but with it having not been working the past few days, we were using the walk through door. I kept fussing at Addie for letting it slam and I’d let it slam every time. So, he had the part to fix it and then he said “I can re-screen that door with a pet screen.” The screen was torn and probably had been since way before Chad bought this house. I said “do it!” He took it with him and will re-screen it and replace it next time he’s here.

OK .. half an hour before I leave to go get Addie. Let’s see if I can at least get the cast on for the shawl and knit up to where I add a few beads before I have to go!