About 100% of the time, when I don’t finish things, it’s because I’ve lost interest. I’ve been kicking my behind for six months for having volunteered to make these flower girl dresses. First, I don’t really like sewing clothes. Second, I don’t mind so much sewing for Addie but making the same thing three times (the pink sample dress, then two real dresses) . . ugh! Why did I ever say I would do that? The wedding is the 20th. When I was here in September, I did everything but the hem and the lace band on the front. I think they weren’t sure about the lace band and I left the hem undone in case one of the girls had a growing spurt in those six weeks.

The dresses have been tried on, the bride has looked at the lace band and she wants it on the dresses. This afternoon I worked on hemming one of the dresses. 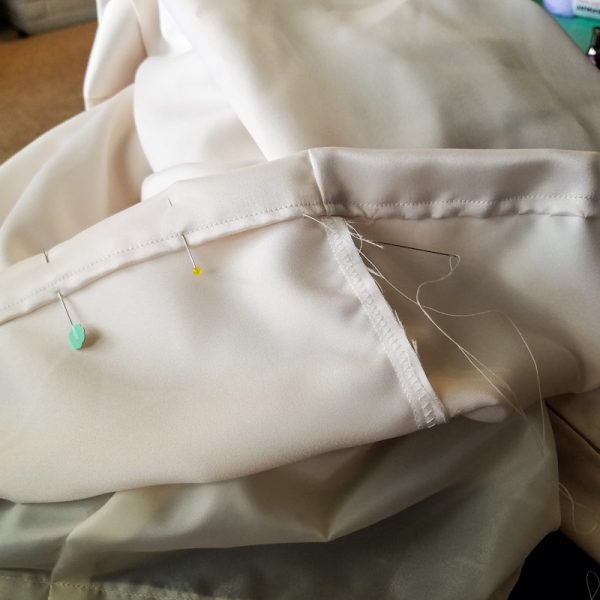 It makes me happy that they were going to have to pay $100+ for each dress but I was able to make them for less than $15 each. It is kinda sad that they’ll be worn once and then  . . who knows what will happen to them.

But, my job was to make them . . not to decide what happens to them after the wedding. Addie’s dress is now done. I’ll probably get the other one done tomorrow and this very long project . . long because I kept putting off finishing it . . will finally be finished.