Last week we had dinner at a friend’s house and she fixed Mandarin Orange Salad. The linked recipe is almost exactly the recipe my friend used. It was so good! Cold. Light (as in no cucumbers, tomatoes, etc.). Refreshing! When it got time for dessert, I said “I’m skipping dessert and having more salad”.

Half (or more) of the time, I plan to make salads and then run out of time or the kitchen is a disaster from having cooked the rest of the meal and I end up saying . . heck with the salad. I’ve had really good luck make salads ahead and vacuum sealing them in jars.

This morning WE went to the grocery store and I bought iceberg lettuce, celery and Romaine lettuce, prayed it isn’t contaminated and washed it several times. I shredded the lettuce, sliced the celery and packed it in jars. I made the dressing (tripled the ingredients), cooked the candied almonds, packed everything into jars, vacuum sealed them. 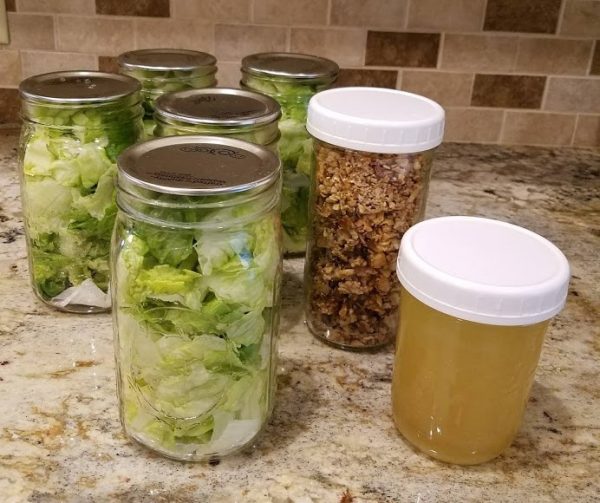 There’s more than enough for two salads in each jar so I think we have salad for at least a week. My friend, after having seen how much I loved the salad, might say that’s enough for a couple of days!

As far as I’m concerned, we could grill a piece of meat, have a big bowl of salad and be done. Summer is the time for eating cold food!

My friend did say not to pour the dressing on the lettuce til it’s time to serve because the lettuce will get all gunky and oily so . . it’s a good thing I ate so much salad at her house. She didn’t save the leftovers.