If ever we should have had insurance on a dog . . it was Rita. It’s not enough that she has eye issues but she has the most crooked teeth ever. When we first found her and took her to the vet, he jokingly said “She needs to see an orthodontist!” 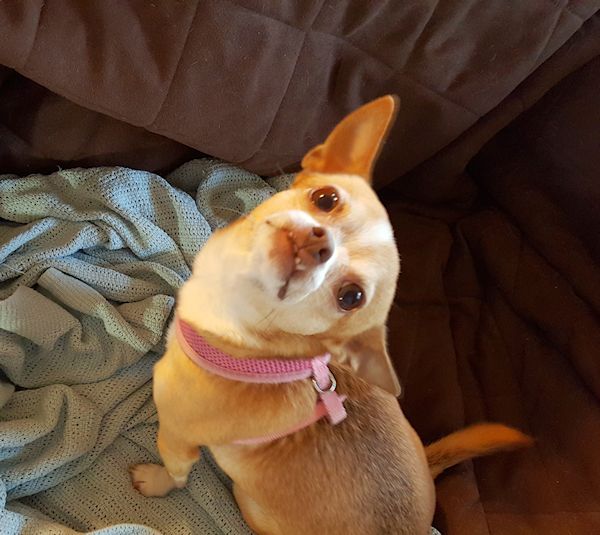 That’s an old picture but see those crooked teeth.

It really looked to me (and I have no idea how dog teeth are supposed to look) like some of her baby teeth never fell out and the permanent teeth grew in sticking out because the baby teeth are where the permanent teeth are supposed to to be . . and two teeth can’t be in the exact same spot. A month or so ago .. I think it was actually around Christmas, when I was brushing her teeth, I thought one of the teeth looked loose. I tried wiggling it but she had put up with the brushing and she was done. I watched it and it never did seem to get much looser but it wasn’t tight in there.

Yesterday afternoon I saw her acting like something was bothering her in her mouth and then I saw her spit something out. 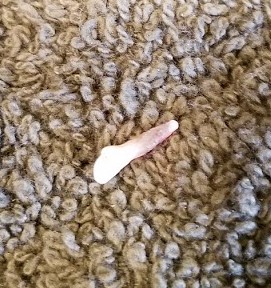 It was a tooth from the front right. There are extra teeth on the left side too. I just checked and at least one of those is loose. Crazy dog! It was 2014 when she showed up and, at that time, the vet estimated she was 3 years old so now, she’s coming up on being 7 years old and losing baby teeth.

Anyone want to guess what weird thing will happen with Rita next? Don’t tell me – I really don’t want to think about other possibilities.