This weekend, mostly just Sunday, was a marathon cooking day for me. One recipe is definitely worth sharing.

My mom started making a rice salad when I was probably in 5th or 6th grade. She made it pretty often . . rice was cheap and filling. I haven’t had it in years and years and when I took that big pork butt out of the freezer last week, I immediately thought about that rice salad so I called mom. I said “Do you remember a rice salad you used to make? It had black olives in it.” She knew right of the bat and she told me . . “It’s Golden Rice Salad. It’s in a cookbook from Western Heights School. Billie Sandel put that recipe in there!” Oh, my . . over 50 years ago and mom still remembered all that. She and Mrs. Sandel taught next to each other for years! She said she would look for her cookbook and call me back.

I did a quick Google search, not knowing when she would call me back and found this recipe for Golden Rice Salad. Mom called me back with her recipe and the only difference is that the recipe in the link includes chopped carrots. Mom’s recipe doesn’t have carrots but has pimento which tells me it’s mostly for color. Since I first had it with pimento, that’s how I made mine. 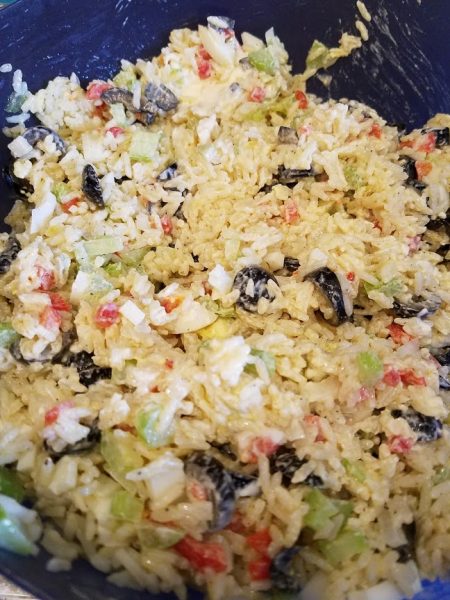 This was even better than I remembered! I took a spoonful to Vince to try it and he wanted more. I told him .. No! You have to wait for dinner. He really loved it.

I made it right by the recipe except for the following changes:

This is a great recipe for taking to a covered dish type function. Most people have probably never had it and it’s really good. Now that the recipe has resurfaced in my memory, I think we’ll have it often.