Yesterday evening we went to town, as we seem to be doing every Tuesday evening. I hate to admit it but Tuesday is the only day of the week that I have a commitment away from home so that means . . clean up, put on make up and look presentable, so every Tuesday when Vince gets home, he says “Do you want to go to town?” If we can get all our shopping done (we = the two of us), then I don’t have to go back to town over the weekend. He will often go to Walmart or Home Depot but I get to stay home because . . I went to town on Tuesday!

When we walked in to Aldi, I knew there was a problem. There was hardly an extra inventory and the farther we went through the store, the less stock there was. They were completely out of the coconut milk we wanted; completely out of hot dog buns, completely out of almost all their breads. I was going to get a couple of boneless legs of lamb but they only had one. Vince asked the lady if they had more coconut milk and she said “We have nothing except what’s out!” She went on to tell us that they order from a warehouse in Houston. She said another warehouse was going to try to get the some inventory but it would not be what they had ordered . . just what that warehouse could send.

I’m not concerned. United seemed to be fully stocked. I think Kroger and United get deliveries from Dallas. But, it makes you think when not even a full week after the storm hit Houston, store shelves are beginning to look empty here.

One thing they did have that I thought looked interesting in a weird kind of way  . . 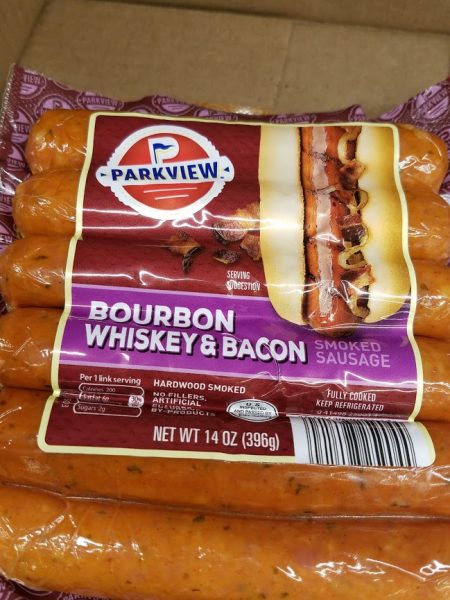 I didn’t get any. Vince said “Get it!” and I said “No, there’s only one package left and someone else may be craving this.” Really, it didn’t look too interesting to me. I would taste it if someone was serving it but I’m not buying a whole package just to try it. I might would like it (doubtful) but . . maybe someone else will be happy I left it behind.

What do you think? Would you try it? Have you tried that or something similar?