I’m always looking for a symbol. Today we’ve pretty much decided we’re staying here for a while. Vince said “Are you sure you’re ok with this? Because . . I don’t want to build a new building and six months later you say you want to move back to MO.” That’s understandable. I made a list of reasons to stay and reasons to go and except for Chad, Nicole and Addie (which are really a HUGE item on that list), there’s no reason to go back.  So far, there are 18 reasons to stay and 5 reasons to go. Two of the five reasons to go are things we could fix if we put a little more effort into it . . spiders and bugs and grass burrs.

We ran to town and when we came home, we saw this: 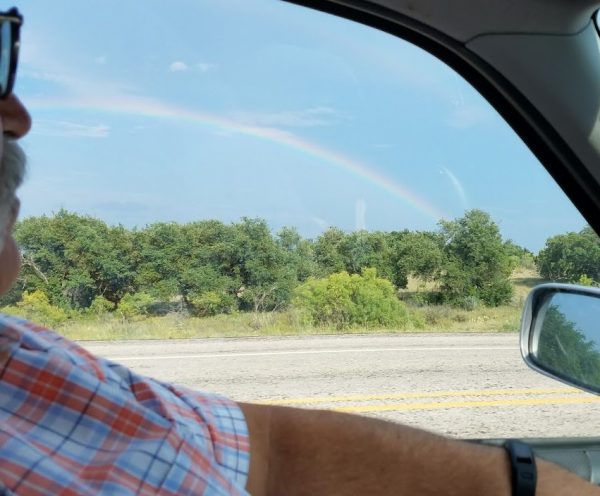 The rainbow was beautiful and Vince wouldn’t pull over so I could get a picture so excuse the dirty window and Vince’s face in the picture!

Then I thought of the rainbow Noah saw . . maybe I’m just looking for a sign but seeing the rainbow after we had decided to stay here . . that seemed like a good sign to me.

Then I remembered when we were leaving Missouri almost exactly six years ago (August 12, 2011).

Even though once I left Missouri that day I was stuck on the interstate for two hours due to an accident, and had spent days crying about leaving Chad behind, the rainbow told me things were going to be ok. Whether the rainbow is really a sign or just happenstance, it always makes me feel better, especially after just making a decision that has me questioning if we’re doing the right thing. I’m thankful for the signs, real or imagined, and the way the calm my fears and jittery nerves.