Once again, I’m not blaming the weatherman but I guess I’m blaming myself for even wasting time looking at the weather forecast. We’ve had a couple of sprinkles lately but nothing that even registered in the rain gauge. Until last night, we hadn’t had any measurable rain at our place since the end of May. Places around us have had a bit but it just skipped us.

Late last night I checked the forecast to see when we might expect rain because we so desperately need it. Nothing. No significant chance for a few weeks. There was rain up above Brownwood, maybe as close as the lake, but that was moving out by 10 p.m.

Rita heard it too but according to her fear of thunder, it was very close and very threatening. She only slept in our room a couple of nights so she’s back to sleeping on the sofa. I listened to see if she came scratching on the door and sure enough, she did. I got up with her so Vince could sleep. There was no more thunder for a while, Rita calmed down and went to sleep so, instead of waking Vince up again, I went to another bedroom and fell right to sleep.

I was sleeping so soundly that very loud thunder at 5 a.m. sounded like an explosion. Rita made a beeline to the master bedroom and woke Vince up before I could get her so . . we were all up at 5 a.m. 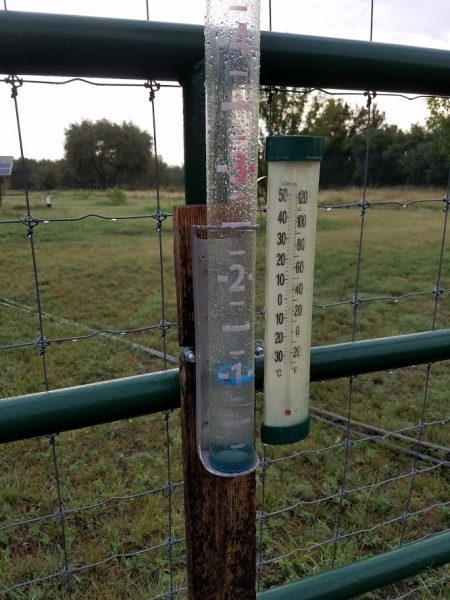 At least we got almost an inch of rain. I wish it would rain without the thunder during the night but around here, we’ll take rain any time we can get it and we’ll say “thank you!” The guy on the local radio just said “After the rain, it’s going to be HOT today and it’s going to feel like south Mississippi.” A good day to stay in and knit and maybe take a nap.