First, here’s an encouraging story about Rita. We’ll never know when she first went blind but I do feel it’s been very recent. She loved to hop up on the back of the sofa and she could look out either door from up there. We had to start keeping the blinds closed on the back door because when she saw us outside, she’d bark and bark and she would go scratch on the door trying to get out. It’s only been in the past three weeks that she’s stopped jumping up on the back of the sofa. I’m glad because I was afraid she was going to go over since she couldn’t see, or go to hop down onto the sofa seating area and hop right off the back of the sofa. It’s also been in the last three or four weeks that she’s been missing when she would go to jump up on the sofa. We got a second bed and put it on the floor hoping she would start sleeping on that but she has not. Here’s the encouraging part . . now, instead of running full speed and taking a flying leap to get onto the sofa, she walks up to it, touches it with her nose, backs up a step and jumps onto the sofa. Since she’s started doing that, she never misses. She’s compensating for her blindness and she’s doing good. As always, she’s still happy and sweet.

She never gives up trying to get old Speck to play with her. He has no interest in playing and he’ll growl at her when he’s had enough. I think he thinks if he ignores her, she will go away. Nope .. she’s not much of a quitter. 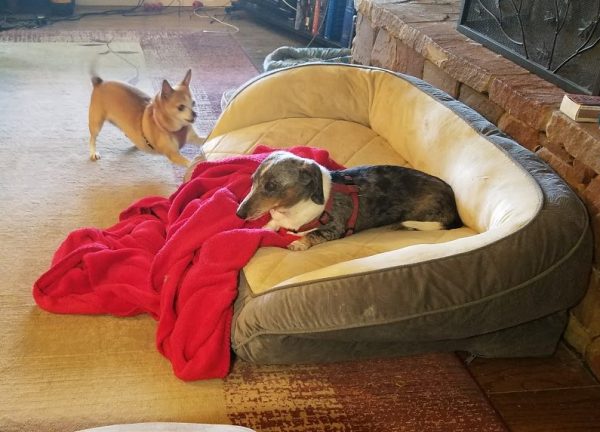 You can see her little tail is always wagging and Speck looking at her like . . get away from me, you crazy dog! 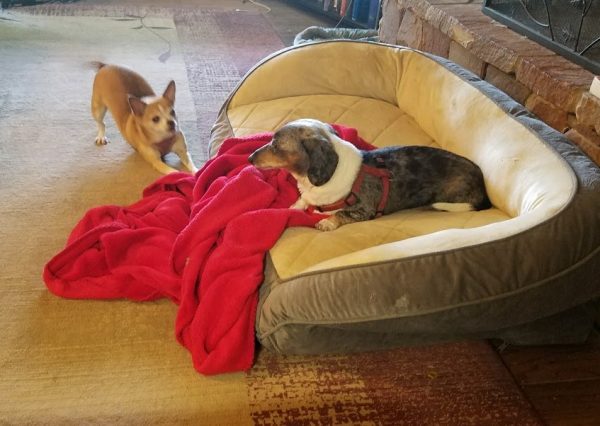 After all the playing she does during the day, and trying to get Speck to play with her, she’s a tired little girl at the end of every day. 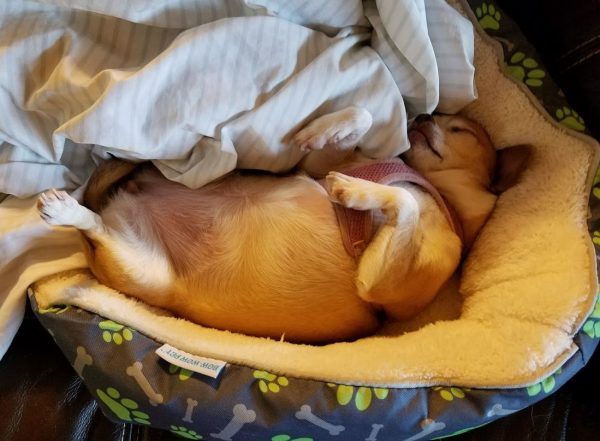 Despite what she’s been dealing with and losing her sight, she has such a good disposition and we love her more every day!