Earlier in the week I posted about a new smoked brisket recipe/technique (shared by a friend on FB) I was going to try. That blog post is here. I put the brisket on to smoke on Thursday night and we enjoyed it last night. My own brisket has always been one of those things that I liked but didn’t love. I seem to like most everyone else’s brisket better than mine but this recipe from Hey Grill is exactly the kind of brisket I love and have been attempting to make. 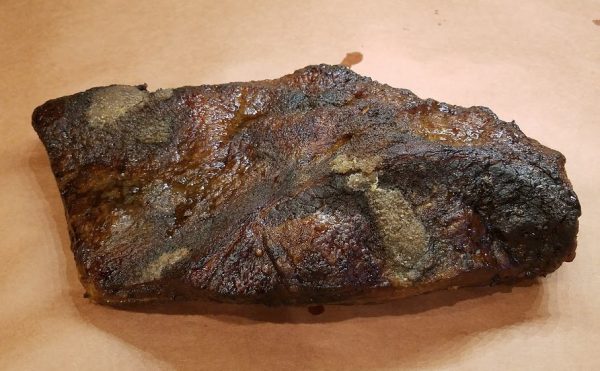 There were several things I did (following the Hey Grill instructions exactly) that were different from my usual brisket smoking methods so I cannot say what actually created the perfect brisket but it was perfect!

Who knows what really made the difference. I am anxious to try it again and see if I get the same (or better) results. 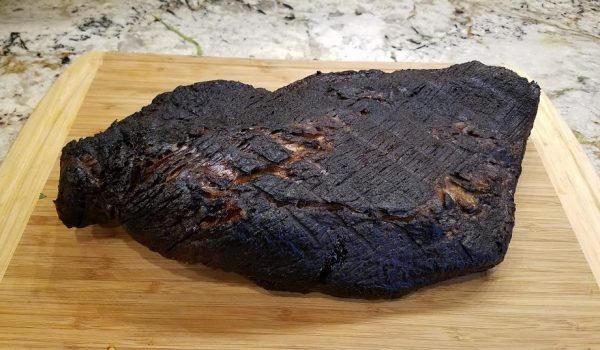 Brisket (After being wrapped in butcher paper, smoking til internal temp reached 202°)

Vince also loved it and agreed it’s the best brisket I’ve ever made. We’ve had this smoker for 12 years and I probably smoke a brisket once a month so him saying it’s the best I’ve ever made is saying a lot. It was funny – we ate and he looked at me like he wanted to say something and then he said “Can you make another one tomorrow?” I told him I’d make another one when this one is gone if he still wants another one that soon.

5:45 a.m. – The brisket was at 174º after cooking 6 hours, 45 minutes. It was supposed to cook about one hour per pound at 225º and I was supposed to pull it when it reached 165° so it cooked a little long. It was a thinner brisket and I should have taken that into account. Pulled it off the smoker and wrapped it in the peach paper.

Next time: Using the Cookshack, I will set it at somewhere between 200° and 225°, probably closer to 200° if it’s a brisket less than 10 pounds. I like to plan on one hour per pound and this cooked a little fast.

7:00 a.m. – The brisket sat for a little over an hour because I was fixing breakfast and getting Vince off to work. Wrapped it in the butcher paper (by the way, I read in the comments at Hey Grill that white butcher paper can be used) and put it back on the smoker, still at 225°. 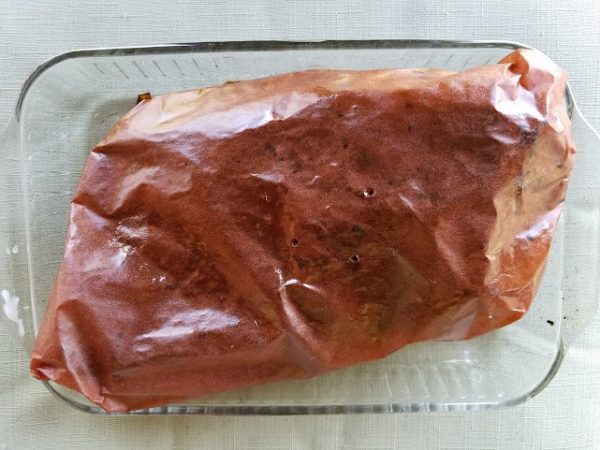 12:45 p.m. – The brisket reached the targeted temp of 202°. I pulled it off the smoker and, still wrapped in the butcher paper, I placed it in a container to catch any drippings and stuck it in an ice chest/cooler (no ice!) to hold it til about 4 p.m. when we were going to have dinner.

Because it cooked a little faster than I had planned (smaller brisket than the 10 to 12 pound recommended in the recipe and because my smoker may cook just a little hot) I held it a bit longer than I think is desirable. I’d like to hold it for no longer than 2 hours but that’s just how it is when smoking something like this. I’ve had briskets that I smoked when I thought I was doing everything exactly the same and the sizes were similar and one might cook in 1 hour per pound and the next might take 1 hour, 15 minutes per pound. That’s a pretty big difference when there’s a 10 pound slab of meat being cooked (like 2 hours difference) and it can mean eating 2 hours later than planned so . . getting it done early isn’t a bad thing and the meat was absolutely perfect and didn’t seem to be harmed by the extra holding time. 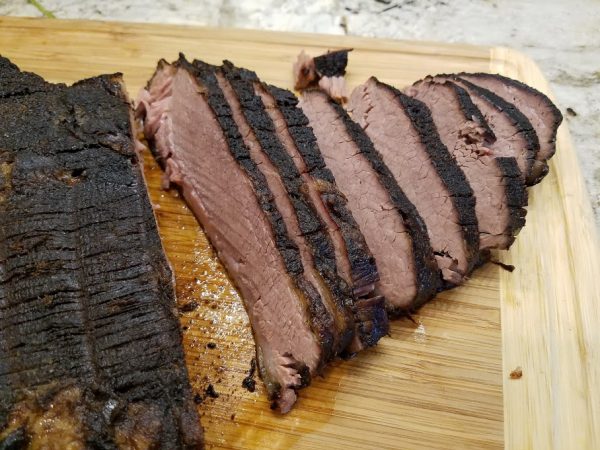 The brisket was moist but not overly greasy. It was totally fork tender. I don’t think either of us ever touched the knives.

This is how I’ll be doing my briskets in the future.