A couple of years ago, we bought Speck a big, very comfy looking Serta dog bed but about six months ago, he had an accident in it. It was a monster to take apart and wash so once I got it clean, I put it up and gave him back his little bed. He had never had an accident in his bed before that day and hasn’t had one since and I thought for sure, that his time was very short when that happened – especially since he didn’t even seem to know he had an accident.

A couple of nights ago, I said to Vince “I think I’ll get his big bed back out for him.” The smaller bed doesn’t have much cushion to it and the big bed has to be way more comfortable. Vince said “Yes, let’s put it back down . . he probably doesn’t have much time left and he should be as comfy as possible.” 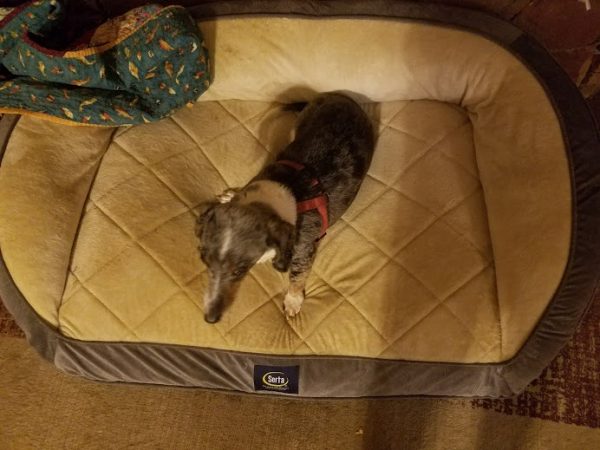 Speck has a little quilt and he likes to be covered up. When I’m home, Speck covers himself up – he messes with the quilt with his head til he gets it right where he’s wants it. When Vince is home, Speck gets in his bed and whines til Vince gets up and covers him up. Don’t ask me why he won’t cover himself up if Vince is home . . I guess because why bother if someone will do it for you!

This morning Speck was in his bed and he kept whining. Vince was getting his coffee ready that he takes to work. Speck kept whining. I was reading email. I said “What’s wrong with him?” and Vince said “He needs to be covered up!” I got up and did it because I was closer but I normally won’t do it because I don’t want to start a habit of me having to cover him up instead of Speck covering his own self up.

He was in the old bed and the quilt was in the new bed. It’s a good jump for Speck to get into the new bed but he hasn’t struggled with it. He jumps right up. I thought maybe he was kinda like me and a little stiff in the morning so I got up and covered him up.

No sooner did I sit back down and grab the notebook, and Speck was whining again. I said “What the heck?” He was now in his big bed. I think it was habit to go to the small bed and then he remembered the big bed. Who knows how an old dog thinks.

I got up and covered him up again. Vince said “This is geriatric dog care!” Yes, I hope someday someone takes as good of care of us as we do of old Speck!