First, you have to read a portion of an old blog post from September 2008. Times like these are when the blog is priceless!

A couple of weeks ago, this is the shirt Chad wore to school.  Where the heck did this thing come from?  Yes, he’s almost 21 years old but he still lives at home and some things . . just not gonna happen!  I said “Chad!  I don’t like that shirt!”  His response . . “I do!” and he left.  I stood in my kitchen kinda not knowing what to think.  He doesn’t usually (usually doesn’t mean never!) do things like that.  I thought to myself . . we’ll have a little talk about this when he gets home from school but, on second thought, I knew it would come through the laundry in a day or two and when it did . . that darned washing machine!   It has a tendency to eat things like that! 🙂

Sure enough, it was in the next clothes basket he brought upstairs.  I washed it, folded it neatly and now it’s tucked away in my little “Grandchildren Box”.  I have a box in which I store things like:

A picture Chad drew when he was about 7.  He was going to summer camp at one of the Baptist churches and he drew a picture of a lady in a very tiny bikini.  It was very graphic!  She even had on long, dangly ear rings.  I wore long, dangly ear rings and I know the people thought I ran around the house in my bikini but I promise you — there’s not a living soul who has ever seen me in bikini.  Anyway, I got called to come see what he had done!  So . . that picture is in the box!

When Chad was in middle school, he was taking French.  They were asked to write a letter to a penpal in France.  OMG!  You should see the letter Chad wrote.  I got called to the school (but that surely wasn’t the first time I’d been called to the middle school!).  That letter is in the box.

Now there’s a shirt added to the box.

There are plenty of things in the box — speeding ticket, discipline tickets from school, hospital bills from the ski trip  . . .

Some day I hope to have grandchildren.  When they’re driving Chad nuts . . I’ll get out my  little box and remind him what he did to me!

This morning we were sitting around talking and Addie said “Granny, You don’t like one of daddy’s shirts!” I said “I don’t? Which one?”

She proceeds to describe the shirt . . with a lady holding a cup and relaxing!

Oh, my goodness! It’s THAT shirt! Nicole asked Addie to show us how the lady is sitting. 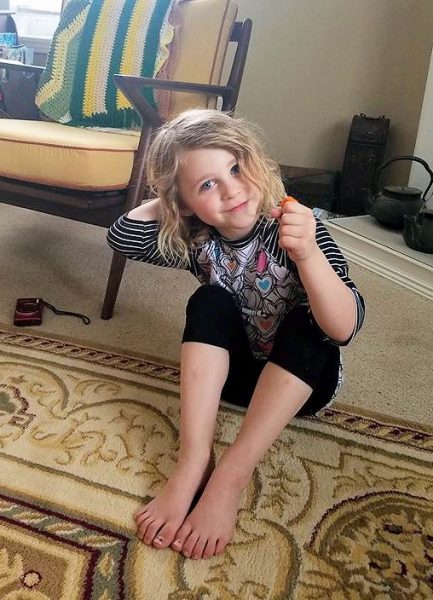 What a crazy family I have!