It’s a bit hard to believe that this time last week, I was just thinking about ordering a coverstitch machine and had mentioned it to Vince and he was not real excited about the idea but agreed. Just to recap, I got the Brother CV 2340 from Amazon. 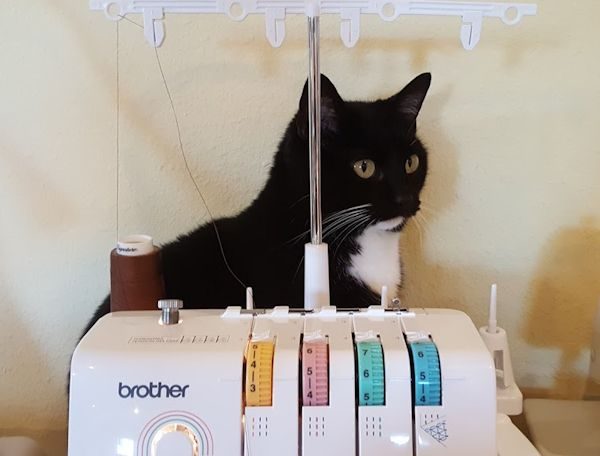 Boots and the Cover Stitch Machine

It arrived on Wednesday. Boots was enamored with it; I was a bit apprehensive and having a little buyer’s remorse. Honestly, all it does is hem. A double line of stitching . . that’s it.

I told my friend, Judy, who also ordered one that in one evening, I felt the following:

Before I bought it, I read lots of reviews and I’ve learned that when someone says “This thing is a piece of junk” or “Don’t waste your money!”, I usually don’t put much weight on those reviews. It’s when someone takes the time to write what they see as being wrong with the machine . . those are the ones that catch my eye.

Lots of people had written how hard it was to get the fabric loose from the machine once you’re done stitching. You can’t just sew off the edge like  you would a serger. You don’t just raise the presser foot and pull it loose. It is a bit of an ordeal. I watched several videos and decided I could do it.

After using the machine for a few days, I’m wondering what was wrong with those people who said it was hard to do! It’s different but it definitely isn’t hard. I’ve made two things using the machine and I don’t think twice about how to get it loose now. In fact, I was sewing on the sewing machine and I found myself going through the same motions as I have to use to get the fabric loose from the cover stitch machine.

One thing I want to be sure you know . . you can sew knit without a cover stitch. If I could have only a serger or a cover stitch, it would definitely be a serger. The serger is pretty useful for sewing knits! It can be done and the edges finished with a zigzag stitch on the sewing machine so if you’re wanting to make something knit for yourself and you don’t have a serger, don’t let that stop you.

The coverstitch makes a nice double needle stretchy hem . . that’s pretty much it.

There are cover stitch/serger combo machines but most people who use them say it’s a big deal to switch from one to the other. On many machines, it involves totally re-threading the machine and even changing out the needles. People who bought combos thinking it would work have mostly said they ended up buying a separate serger or cover stitch, depending on which feature they liked best on the combo machine.

In the three days I’ve had the machine, I’ve made a fleece cardigan for Addie. 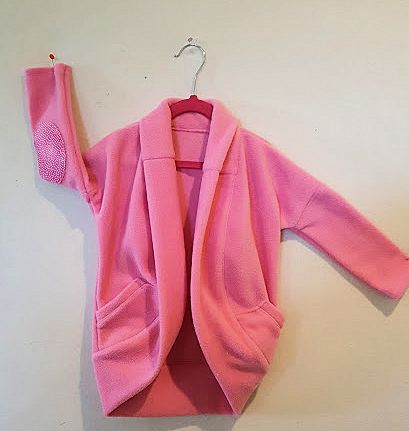 I also made a tunic top for me. 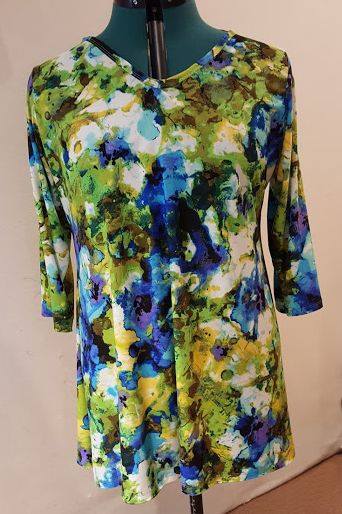 I’m so happy with the tunic. I’m going to make myself another top tomorrow and if I have the right fabric, I might work on a cardi for me.