It must be a cat thing to want to be where he isn’t supposed to be. There are two closets in the sewing room and they’re both off limits to Boots. One has fabric. One has quilts, batting, and other things I don’t want him on. No matter where he is, he knows the sound of one of those doors opening and he’s like a flash of lightning going in there.

Today I had to go into one of the closets. Usually, I’ll pick Boots up and hold him when I go in one of those closets. Today he was sleeping and I thought I could get in and out without him even noticing. Wrong. 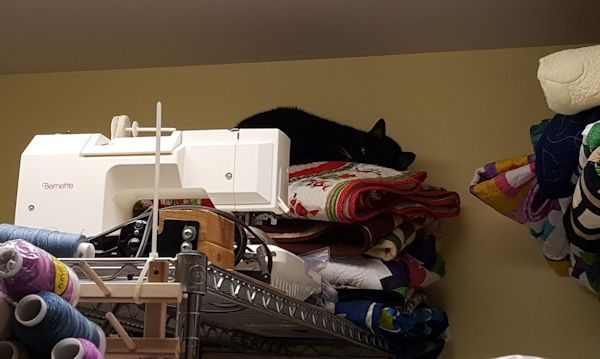 Boots in the Closet

He’ll usually come out after a while but today, he stayed up there for hours! Why does he want to be where he knows I don’t want him to be?

At least I now know where my favorite Christmas quilt is located!