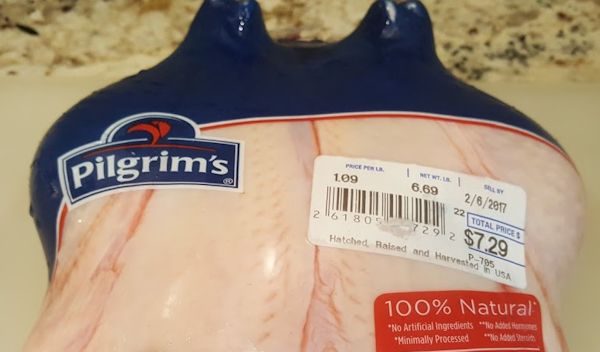 Look at that . . hatched, raised and harvested in USA. I don’t even know what to think so I’ll just say nothing about that. Chickens were on sale last week at Aldi but I didn’t get one. I think they were 88¢/pound. I had checked Price Matcherz and hadn’t seen any chicken on sale, but United doesn’t price match and I wasn’t going anywhere else so $1.06/pound was fine with me.

Six plus pounds of chicken, including bones and whatever strange parts were stuffed inside the cavity, and just two of us. For about 10 seconds, I debated about what to do with this whole chicken. Roast it and use the leftovers for chicken salad, chicken enchiladas, maybe chicken tamales, but I decided to whack that bird into two pieces, right down the middle. 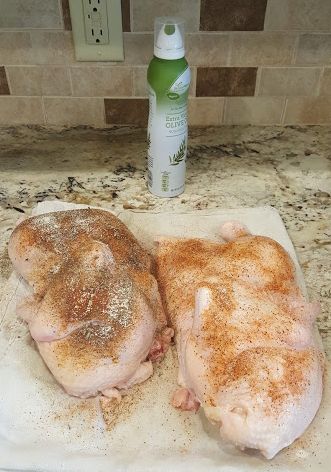 Disguising leftover chicken for over a week didn’t sound appealing so I’m going to take half (on the right) and boil it and make chicken and dumplings. I could eat that for a week without any disguise at all!

The half on the left, I’m going to roast that and use the leftovers for either a chicken casserole or chicken salad. I’m thinking I might make a hot chicken salad and make some bread dough and make like little chicken fried pies but use the air fryer.

Knowing that we’ll eat chicken and dumplings at least two meals . . probably more, and we’ll have roasted chicken for one meal and then something done with the leftovers, we’ll get at least four meals out of that $7 chicken. Even after adding veggies/salads . . it’s a heck of a bargain. I’m so glad I love to cook.

I’ts been adjustment . . a rather long adjustment . . learning to cook for just the two of us. When Chad was home, he always had someone else dropping by for meals and I sometimes felt like I was cooking for an army. We don’t seem to eat as much as we once did and with it being just the two of us, I really have to plan our meals or we end up with way too many leftovers.